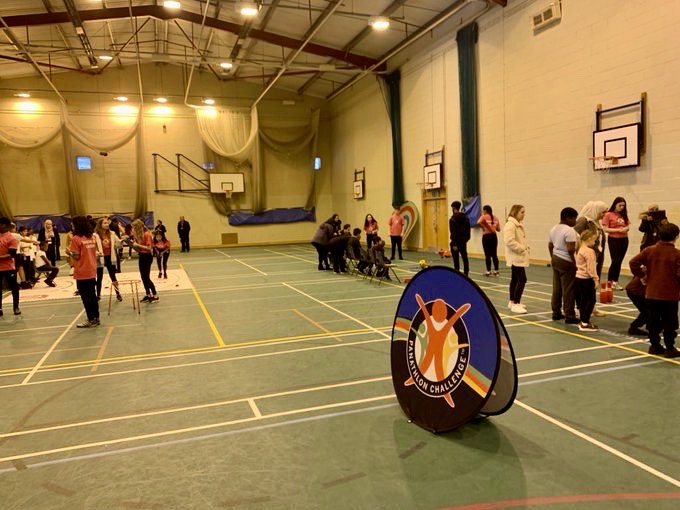 Panathlon continues to break participation records and March 12th saw us staging 9 competitions in one day.

There were four in London, plus events in Havant, Merseyside, Doncaster, Hull and Gloucester with 461 children competing and 150 young leaders officiating.

In the LB Redbridge, the Primary SEN Panathlon event saw demand for 3 days of activity. A double event was held at Caterham Schools for 12 schools in the morning and then later in the afternoon for another 8 schools. At this March 12 double header, 96 children competed in total during the day.

Schools once again provided strong feedback and evidence of the impact that Panathlon has. Russell Wilson of Gilbert Colvin School said, “Thanks for a brilliant afternoon the children loved it, I have never seen so many happy faces. We were fortunate to win our competition, so our children were extra happy, when they got back to school, they could not contain their happiness and were telling anyone they saw how well they had done. A big thank you to Tracey from Panathlon who was so helpful. I would like to arrange something in our school, We would be interested in something for KS1 children”

Lyanne Clark of New Rush Hall School said, “Thank you for a great event yet again.  It is so nice that our pupils are now included in sporting events like these as we missed out for many years.  The whole event was managed brilliantly.  Looking forward to the next event.”

Hayley Summerbell, PE Co-ordinator, St Augustine’s Catholic Primary School said, “We would just like to say a massive thank you for the Panathlon yesterday, it was extremely well run and such a lovely event to attend. Our children came back to school with the biggest smiles on their faces and are already asking when they can go back again!”

In Merseyside, 34 children in total attended from 3 schools representing each of the local authorities to compete in very highly competitive secondary aged Multisport event with Wirral winning the competition. Originally 5 teams were to attend but due to the intimate outbreak of the Coronavirus and the vulnerability of some of the children who were due to attend the schools withdrew their participants which is understandable considering the risk to the children.

Panathlon Events Officer Steve Sullivan, who spearheads the programme, believes it’s vital to create a lasting legacy through the Panathlon programme saying: “We’ve been building on our events for a number of years. All our Panathlon events are based around building pathways, this enables a strong calendar of participation to exist and offering variety”

At Copthall Leisure Centre, 89 children took part in the North London Final with new winners for the first time, the team from Hammersmith & Fulham who incredibly defeated last years overall London Champions Enfield by the barest of margins.

Parayhouse Learning Support Teacher, Daniel Cayford, said: “The children displayed a competitive nature in securing a closely fought encounter with other boroughs in London and all had a fantastic time.  I’m very proud of all students and staff for their efforts in such an achievement at securing first place.”

In Hull, on the same day, March 12th it was the first day of two Primary Panathlons, which saw Neasden Primary secure victory over 6 other schools.

Alex Sherwood, Primary Lead for Hull Active said “Panathlon has really enriched and enhanced our sports calendar. It has had a truly major impact on our area and thanks to our Panathlon days that impact lasts throughout the whole school year.”

This was the busiest day in 25 years of Panathlon history with 9 competitions on one day involving over 600 competitors and young leaders. Well done everyone!