The stunning central London half marathon which is now in its 10th year, takes in world famous landmarks of London and four of the prestigious Royal Parks; Hyde Park, Green Park, St James’s Park and Kensington Gardens.

In the years since the race began over 112,000 runners have crossed it’s finish line, and we are delighted to have 34 hopefuls aiming to do the same this year.  For five of our runners, this will be the first race of this distance they will have completed.

When asked for their reasons to run they included: “motivation for fitness”, “to push myself physically”, to “achieve what I thought was impossible” and “to raise money for a worthy cause”.

Veteran of several ultra marathons this year already, Emily Plummer said, “I saw first hand the fantastic work Panathlon do for thousands of disabled children when I went to the London Panathlon Olympic Park Final in June. The joy on the faces of those children competing and challenging themselves was inspiring and I am thrilled to be running for the charity.”

Ashley Iceton of Panathlon highlighted the importance of events such as this for the charity, “In the work we do we have to fundraise every penny we spend. So having a team or runners all helps us to achieve our aims. Thank you to all of our runners for helping to support the charity.”

Monies raised will go towards providing sporting opportunities for young disabled people across the country. We have just announced record breaking figures for the last year when over 13,000 children benefited from Panathlon Challenge. Read more here. http://panathlon.com/bigger-and-better-than-ever-before/

Thanks to everyone taking part, we will report again next week on how they all did! 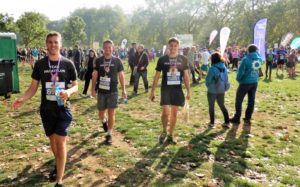