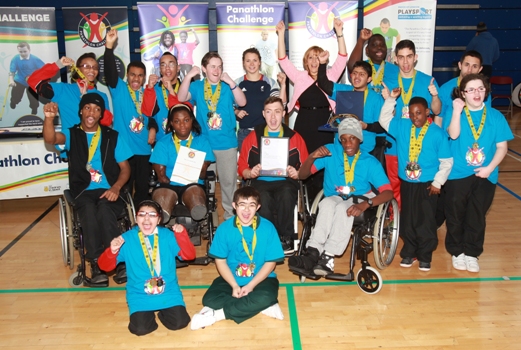 Croydon stormed to victory with a massive 68 points out of a possible 70, and qualified for the London Final as defending champions. Croydon made up of  St. Giles, Priory and Woodcote Schools won Boccia, Table Cricket, Polybat, Kurling and Athletics field and races. Fi Bell, Croydon team co-ordinator said, ” We are delighted to make the Final again, it was a terrific team performance. Thank you for another fantastic event. The time and effort that goes in to organising these competitions is awesome. Panathlon is an amazing charity giving our children a marvellous experience.”

In second place, their highest position ever, was Merton with 49 points who won football and had 3 second places in Boccia, Table Cricket and Kurling. Sutton came in 3rd with 41 points and Richmond in 4th with 38 points.

The victorious Croydon Team which will defend their London Crown on June 19th. Pictured here with Jane Evans from the Jack Petchey Foundation, who have kindly supported Panathlon again this year !

Liz Johnson Panathlon Ambassador and Paralympic Champion, was on hand to inspire the Panathlon participants and award medals.