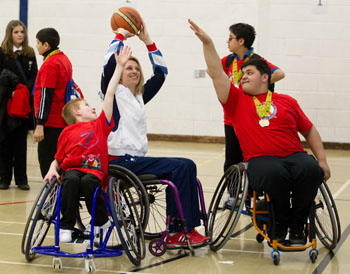 Today teams from Bromley, Croydon and Sutton fought out the second South London Semi-Final at John Fisher School in Purley. Croydon are defending London Champions from the Summer of 2012, and Bromley are also past winners so it was going to be a tight and competitive competition.

Croydon made up from St Giles and Priory Schools, as expected triumphed, and in the process won Kurling, Polybat and Athletics Field and Races amassing 64 points in the process. The major shock was the Sutton team (Sherwood Park School) coming second overall, and qualifying for their first ever South London Final, by defeating Bromley (Riverside and Marjorie McClure Schools) in to third place. Sutton won Boccia and table cricket and came second in Kurling and Field Athletics.

Sue Fergusson & Ganymeade Ghahoui, from Sherwood Park School in Sutton who are through to their first ever Panathlon Regional Final, said, “The underdogs finally came good! We came second! We are ectastic & very proud of our team!”

Croydon and Sutton now join Merton and Richmond in the South London Final at Crystal Palace on March 13th to see who will be crowned South London Panathlon Champions and make it through to the All London Final on June 19th.

A big thank you also to John Fisher school for hosting and supplying the Young Leaders who we trained as Panathlon Officials a few weeks ago and who displayed great skill, enthusiasm, confidence and understanding today, running the sports.