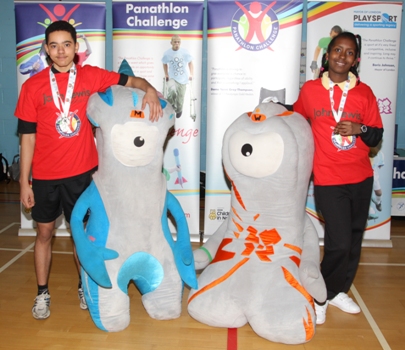 Langdon School in East Ham today hosted incredibly its 21st Panathlon Challenge, the first one dating back to 1996 !

124 Competitors from 12 East London Schools made teams up for Newham, Tower Hamlets and Redbridge Boroughs who competed to see who would go through to the East London Final on March 26th.

Also visiting were Wenlock and Mandeville, who spent 2012 in the Olympic Park at John Lewis at Stratford. They are now kindly on tour with Panathlon and the Panathletes are loving seeing them at the events around the country !

John Lewis have kindly donated £33,000 to Panathlon this year to provide coaching opportunities across all of the 33 London Boroughs in preparation for the Panathlon competitions.

The team from Newham made up of 8 Local Schools won with an incredible score of 64 points having won Boccia, Table Cricket, Kurling, Polybat and Field Athletics. Newham again qualify for the Final on March 26th and will face Bexley who qualified from the South East London competition and the winners of the next Competition in East London on the 4th March.In 2nd place was Redbridge with 54 points having won Athletics Flat and 2nd places in Boccia, Table Cricket and Kurling. In 3rd place was Tower Hamlets with 50 points.

Steve Peaty, team manager for the victorious Newham team said, ” It was a fantastic performance from Newham today and I am pleased that the team qualified for the Final in March. Panathlon unites our schools in Newham with 8 of them providing competitors for today’s team, and there is nothing quite like it in terms of what it provides our children with Special Educational Needs. I’d also like to thank John Lewis for providing us with vital coaching funds that has enabled us to prepare our team for this years competition. We have set up several school clubs due to the John Lewis investment which provides many extra hours of sporting preparation”