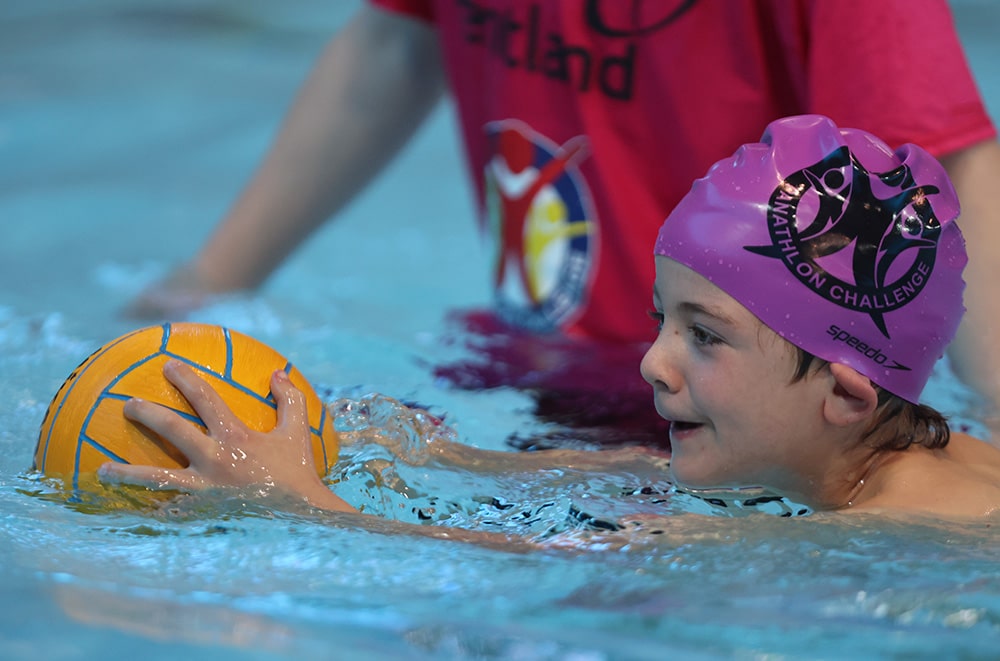 Eight schools who are steeped in Panathlon experience gathered at the London 2012 Aquatics Centre on Thursday (November 10) for a special Speedo showcase swimming gala.

The gala featured schools from London and Essex who had excelled at previous Panathlon swimming competitions. We brought them together to promote Panathlon’s impact to 20 visiting executives from Speedo, the swimwear company which is owned by our sponsors Pentland Brands.

>>> Check out a full gallery of images from the event here <<<

Speedo staff fulfilled volunteer roles, guiding the competitors and helping to officiate alongside Young Leaders from Devenant Foundation School in Loughton, Essex. They were joined at the medal presentation by Commonwealth Games medal-winning divers Grace Reid and Emily Martin (who train at the Aquatics Centre).

Having competed in Panathlon competitions on many previous occasions, staff from all competing schools were able to describe our influence on pupils’ confidence, ability, attainment and engagement in swimming.

Pupils from Darlinghurst Academy in Leigh-on-Sea were among the teams. One youngster, Cody, revealed he had worn his medal to bed for weeks after his previous appearance at a Panathlon gala. Another pupil called it “the best day of my life”.

“When we got the letter to say we were invited today, I’ve never seen anyone so excited in my life,” Darlinghurst teacher Andy Felton said of Cody. “Three of the children we’ve brought today were non-swimmers back in September, but in swimming lessons we have prepared to be ready for Panathlon and they have just done the raft race.

“These events mean we can bring children who don’t get picked for any other sports teams. This gives them more and more confidence in the water. The activities are so inclusive; they can all do them no matter what their ability levels.”

Panathlon has become an important part of Darlinghurst’s swimming provision. They have started using a local pool and 50% of their Year 5 pupils have now passed their 25m badge.

“Our school is in a seaside town so it’s really important that our children can swim,” said Andy. “We’ve managed to find a pool to use and we’re improving all the time. The benefits have been numerous – swimming is not just fun, it can save your life!”

Four schools at the gala (including Darlinghurst) fall under the remit of Southend School Games Organiser Kirk Edwards, who is a long-term supporter of Panathlon.

“Within our area we have events for the best athletes in schools and for a ‘middle band’ of pupils, but we’d always struggled to provide a platform for SEND young people,” he revealed.

“Partnering with Panathlon has been the perfect solution. We’ve now got swimming galas, 10-pin bowling, cricket and multisports. Schools see it as a calendar in itself rather than a one-off festival, so young people are getting a series of events in a number of sports.

“This can turn into a lifestyle change for these young people. From these events, they may build the confidence to go to sports clubs or simply to ask their parents to go swimming or bowling again, getting out and taking part in physical activity outside the curriculum.”

“There was lots of cheering as we left school in the minibus this morning,” she smiled. “They go back into school with more confidence in lessons and they’re keen to have another go.

“It gives them the opportunity to be chosen to represent the school and for the children who get picked for teams all the time to watch them in assembly and celebrate their achievements.”

The gala capped a cracking sporting week for Milldene Primary School in Colchester, who were visited on Wednesday by Courtney Tulloch, fresh from winning a bronze medal at the World Gymnastics Championships in Liverpool. They also competed in a Change4Life sports festival. “Coming to this amazing venue is the icing on the cake!” said Milldene Head Teacher Susan Lock.

Milldene pupils arrived in sponsored school sports kit, which Mrs Lock said was an integral part of the experience. “They take great pride in representing the school wearing the Milldene kit,” she said. “The children know it’s an honour to pull on the kit, just like the elite sports stars they see on the TV. It’s all part of the buzz.” They also wore the kit when winning a recent Panathlon 10-pin bowling competition.

Milldene pupil Charlie Pozella (above), 10, beamed: “Competing with my team-mates in the water is amazing. It feels amazing that I’m in the same water as Olympians!

“It was great because I got to win loads of races and be with my friends. I’m definitely going to show off to my family tonight and I’ll put my silver medal with my football and golf trophies.”

As well his school winning gold medals on the day, 11-year-old Longshaw Primary Academy pupil Danny won a pool tile signed by Commonwealth and European diving champion Andrea Spendolini-Sirieix for clocking the fastest time in the 10m race. It was especially satisfying for him after he missed a previous Panathlon competition because a car ran over his foot!

Danny said: “I really enjoyed it today because I can race against other children and show how good I am at swimming. I like to win and I hate losing! I got really mad when I broke my foot and couldn’t go to Panathlon last time. I’m going to put this medal in my special sports box.”

Longshaw pupil Millie, 11, added: “The day has been very challenging because we were competing against other schools. I was a little bit nervous this morning but I overcame my nerves – and I loved it!”

Panathlon Chief Operating Officer Tony Waymouth commented: “We would like to thank the eight participating schools for helping us showcase the impact of our swimming programme to today’s special guests from our sponsors Speedo. They left in no doubt about the value we provide to children thanks to their investment.”

Panathlon plays a “priceless” role in sustaining the London 2012 legacy a decade after the Games, according to management staff at the Olympic and Paralympic venues.

Competing at the London 2012 Aquatics Centre in a special Panathlon swimming gala “captured the imagination” of primary-age pupils from the London boroughs of Redbridge and Havering. Panathlon staged the…