There was a fantastic atmosphere throughout the day, but it was the strong team from St. Edmundsbury, (pictured at the top in green) made up from Priory and the Riverwalk Schools, won in an intense battle with Thomas Wolsey School of Ipswich.

Priory School brought a brand new group of first –time Panathlon athletes alongside some experienced pupils and in combination with Riverwalk gained 3 wins and 2 seconds to secure 54 points.

They won four out of the six disciplines, which separated them from Thomas Wolsey School by 8 points.

Thomas Wolsey’s 46 points were gained on the back of 2 wins and 2 seconds. They finished 10 points clear of third placed Stone Lodge and 14 points clear of 4th placed “All Stars” (The Bridge and Hillside) who scored 32 points. The All Stars secured a New Age Kurling victory.

St. Edmundsbury will now represent Suffolk in the East England Final in the new school year.

Courtney Smith of Priory School said, “This is my first time at Panathlon, I so enjoyed it, I want to come again, I have heard about it from other pupils at school, now I have experienced it, it was great”

Callan Durnan another 1st time Priory pupil said, “I was very excited this morning on the bus coming to my first Panathlon, I have seen others come back to school with trophies and medals, I wanted to be part of it, I am at the end of the day, so happy I got all out of it what I thought I would.“

Jane Chave teacher in charge at Priory said, “It was great to bring out a group of new children, it tests them, it helps the sport in the school develop and helps us get children ready to slot in when the experienced ones leave.”

Jane also paid tribute to her contemporary at Riverwalk, Brianne Hogg who is leaving and going to Bedfordshire. “We have worked well together over the past 5 years and the children will certainly miss her.

Priory and Panathlon pass on their best wishes to Brianne for all the support she has given both organisations. 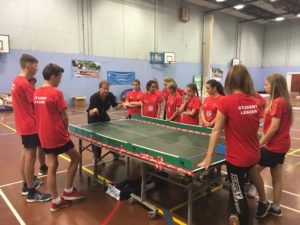 The young leaders from Copleston High (pictured left) performed to extremely level and all received tributes from all participating schools and teachers.

Leaders Jade Jeffs and Steph Wright both commented, “We really enjoyed working with the kids and seeing how not even a disability stands in the way of them competing hard and fairly and having a sense of fun and sportsmanship.”

Due to their incredible on-going commitment, we would like to thank the Emma Holloway Foundation for all their support and the Outstanding Achievers and testimony to the kind of children who participate in the Suffolk programme.

Thank you also to Sport Suffolk and Schools Games for your continued support.