Staff from the St. James’s Place Charitable Foundation said they felt “privileged” to act as volunteers at Monday’s Yorkshire Primary Panathlon in York.

The Foundation is one of Panathlon’s principal sponsors and volunteers from its Leeds office were on hand at the Poppleton Centre to encourage, cajole, organise and officiate as seven primary schools from across the region competed for the title of ‘Yorkshire primary champions’.

St Augustine’s C of E School from Halifax were the victors by some distance with a total of 48 points. They had qualified by virtue of winning the West Yorkshire Primary Panathlon back in February and beat nearest challengers Abbey School, from Rotherham, and Girlington Primary School, from Bradford, who finished level on 33 points each.

St. James’s Place volunteer Jon Ellis was particularly popular with the competitors, as he came dressed in a rotund, inflatable Santa Claus outfit.

“I only joined St. James’s Place in April and this is the third time I’ve had the privilege of working at a Panathlon,” he reflected. “For me, this is not selfless; it’s selfish, because I get just as much enjoyment out of it as the children! You just can’t buy this: the competition, the interaction, the fulfilment the children get from it and, of course, their smiles.” 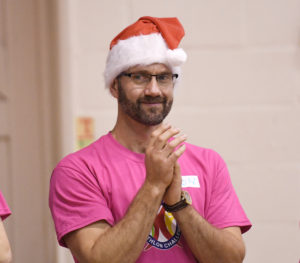 Fellow volunteer Jonathan Kattenberg (right) was particularly energetic in assisting children in the skittles event – not surprisingly, as he is currently training for an insanely challenging fund-raising effort for the Foundation.

In February, Jonathan will be walking the course of the 1,000-mile dog sled race from Alaska to Whitehorse in Canada, trekking an average of 45 miles a day through sub-zero temperatures, up and down peaks of 4,000ft, with a 40-kilo sled tied to his back – alone. “I just can’t resist a challenge!” he quipped.

He added: “Today has been amazing. It’s lovely to see the kids having such fun. You can’t put it into words. It’s a massive thing for us at St. James’s Place, because it shows how much we care about the community and that we are sincere and supportive of the work the Foundation does.”

Andy Miles and his 12-year-old daughter, Isabel, made a great team officiating in boccia blast. “She led the whole event; I was the assistant!” said Andy, for whom this was his first Panathlon experience. He added: “It was just great to see all the children smiling – mine included! It’s vital St. James’s Place get involved in this kind of thing. As well as looking after our clients, it’s one of the most important things we do.”

Isobel said: “I’m glad my school had a teacher-training day today! It’s been really rewarding and great for my confidence, leadership and team-building skills.”

Gold medallists St Augustine’s are a mainstream school whose team members have a mixture of disabilities, including severe learning difficulties and some who are deaf. 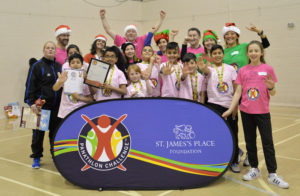 “It’s so important for the children, because they might not get the chance to compete anywhere else,” commented the school’s Sports Development Officer, Dawn Kelly.

“They get to experience taking part in a competition, being with other children that are like them, work on their fine motor skills and build friendships across year groups.”

St Augustine’s pupil Rehaan, 11, said: “I’m shocked! The boccia was my favourite event”. Meanwhile, Ismail, nine, reflected: “This feels excellent! I’m going to put my medal up on the wall in my bedroom.”

“Many of our children have come from mainstream schools, where it was about pushing kids to become county netballers and footballers. But with us, it’s mostly about using sport for belief and belonging – belief that they can achieve and belonging to something bigger than themselves,” she said.

“You only have to look at them here to see that’s exactly what they get from it; Panathlon gives them real belief in themselves and a sense of not just belonging to a team, but representing their school and their county.”

Abbey pupil Libby Jo-Apletree said: “I’ve loved it! Everything was so awesome, especially table cricket. I’m going to put my medal on my fridge in our kitchen.” 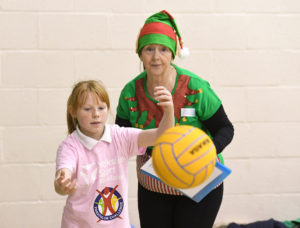 A coincidence that reveals Panathlon’s growth across East Yorkshire came when Rachel Dinsdale, a teacher at fourth-placed Flamborough Primary, revealed that her son was to be a Young Leader at the following day’s East Yorkshire Multisport Panathlon at the Costello Stadium in Hull.

“The children loved winning the East Yorkshire final in Scarborough in what was our first ever Panathlon,” said Rachel. “It’s great for them, because many of them don’t otherwise get the opportunity to do much competitive sport. It’s so great for their behaviour, motivation and self-esteem. They feel very proud when they go back to school.”

For pupils from the fifth-placed Harden Primary School in Bingley, West Yorkshire, it was the first time they had ever represented their school at sport.

Teacher Paul Weston commented: “It’s a massive boost to their confidence to be chosen to come to sporting events and to compete. They’ve been so excited. One of the girls has mentioned nothing else for weeks since she found out we were coming.”

The day’s Young Leaders were provided by nearby Manor Academy. Beth McGarry, 15, took on the role as part of her GCSE PE syllabus. She said: “It’s been really great. The children have all been really positive with whatever sport they’ve played and their reactions are terrific. It’s been a really good experience.”

For a full range of photos from the gallery – please see here.