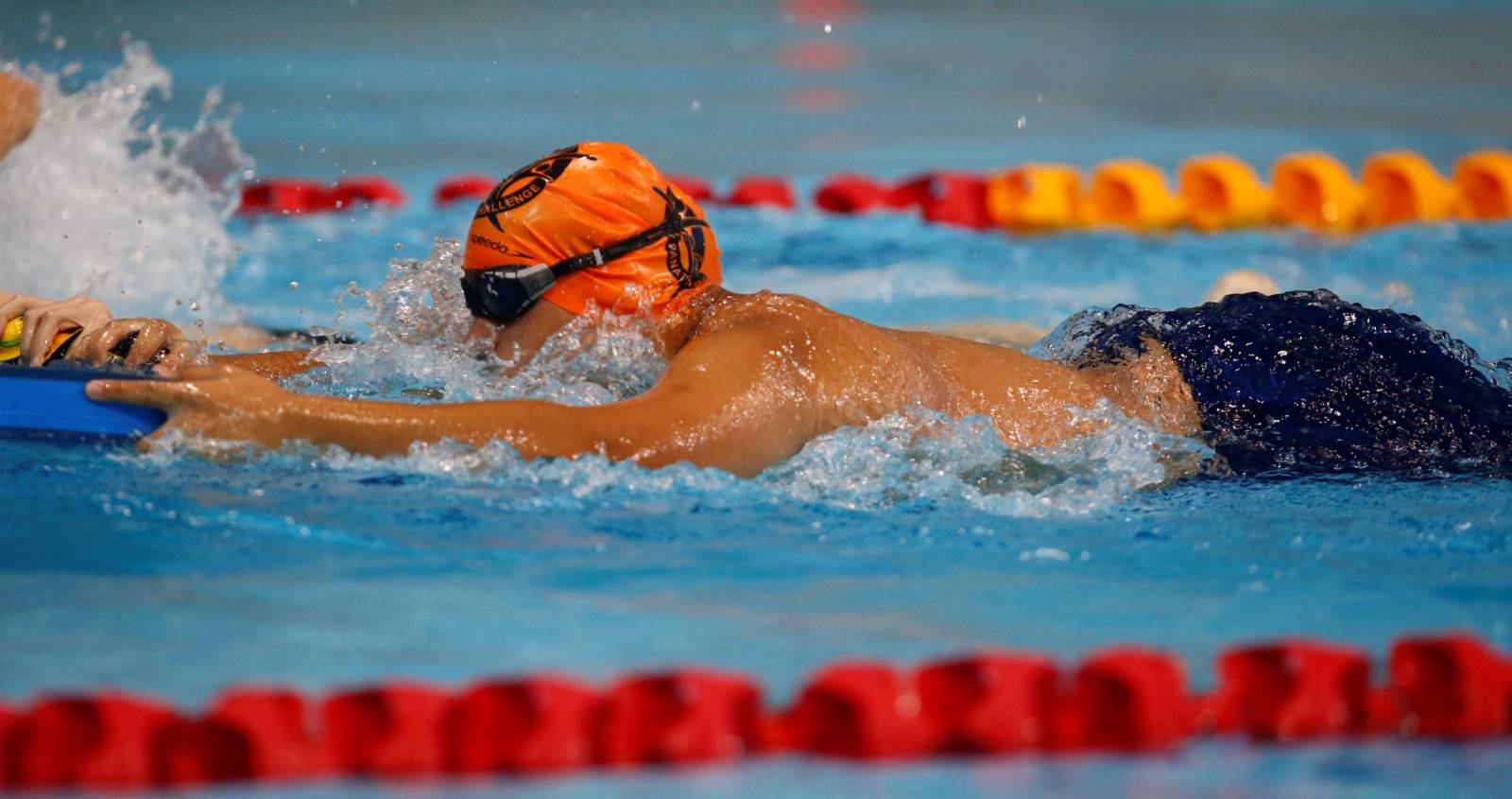 Stormont House School from London hailed Panathlon for providing “equality and equity” after they were crowned our inaugural Special Schools’ Swimming champions at the London 2012 Aquatics Centre.

The team of five from Stormont House in Hackney racked up 79 points to pip nearest rivals Manor Green, from Berkshire, by just a single point. Manor Green’s Berkshire neighbours Addington School went away with bronze medals, finishing 10 points further back.

The competition brought together nine schools from as far afield as Merseyside, Suffolk and Oxfordshire for Panathlon’s first ever national swimming competition specifically for special schools. It follows our first ever National Primary Special Schools Multisport Final at Stoke Mandeville Stadium two weeks ago. 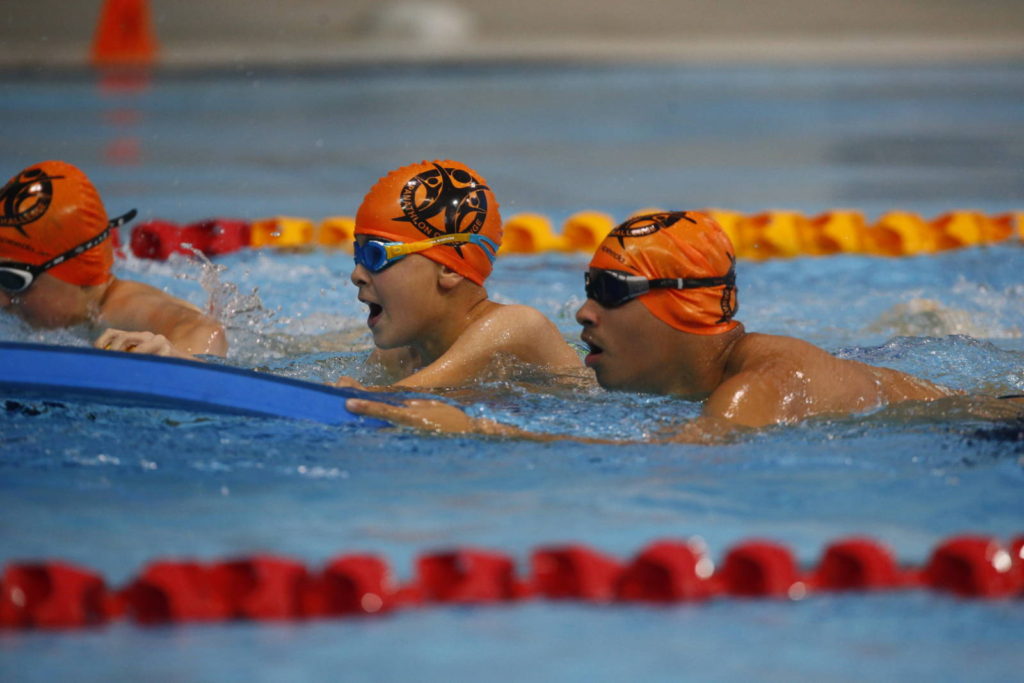 Stormont House teacher Joel Calvin called the event “a celebration of these pupils’ ability, rather than their disability” and said it helped “prepare them for adult life.”

Mr Calvin said: “For these types of students it gives them a lot of confidence and boosts their self-esteem. It’s really motivating for them, especially when they come back to school with the medals. The inclusivity is wonderful.

“Bigger than that, it makes them feel more a part of society as a whole, not just sporting events. It’s a big deal. In some areas of life they may get overlooked because of their needs, but this levels the playing field and brings not only equality but equity too. It caters to their needs specifically and it allows everyone to compete for the same prize.

“The main thing is, Panathlon just gives everyone opportunity. It motivates them to push themselves. It’s something for us to celebrate – not just winning and being competitive, but making them feel a part of something so big and positive.

“It also gives them life skills; the way they interact with the organisers, how they adjust to and abide by the rules and regulations – all of that prepares them for adulthood. That’s really key and it’s something that is often overlooked by teachers, who just think about the curriculum. This, being in a national competition, is a lot bigger than that.”

Proudly showing off his medal, Stormont House student Shay Martin, 14 (pictured, far right), added: “It is great fun to be here. It’s great that it’s all special schools here today because it gives us a great chance of success.” 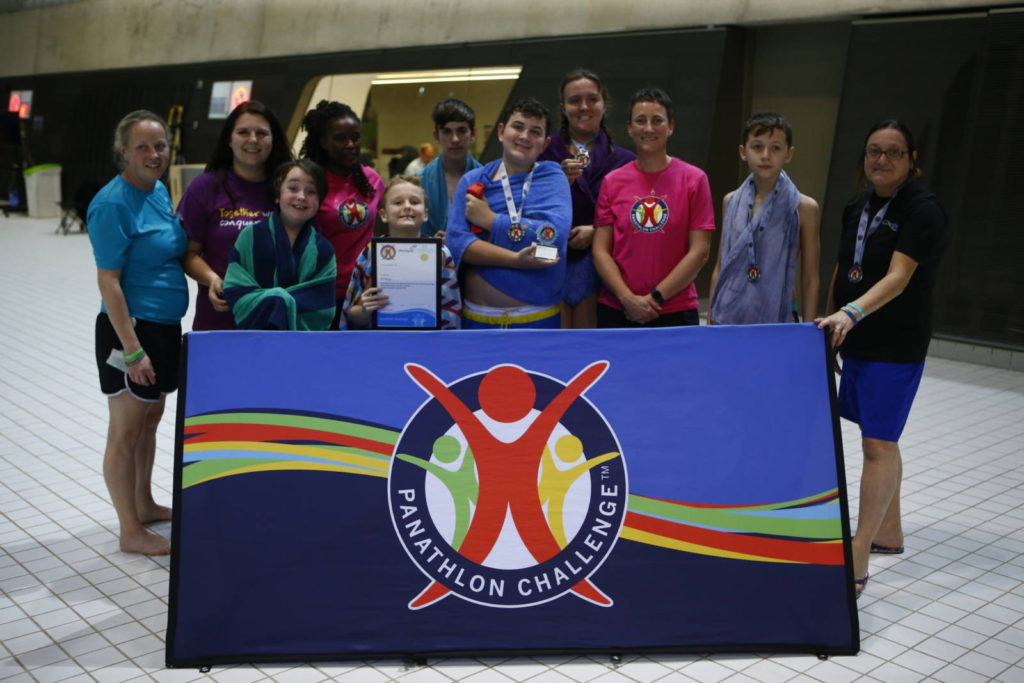 Second-placed Manor Green (left) have been competing in Panathlon competitions for four years. After they were narrowly edged into silver medal position, nine-year-old pupil Jos Marsh reflected: “I’ve enjoyed the day 170%! It’s a really good thing that we’re all shouting for each other and cheering each other on. I’m going to hang my medal around my neck then put it on my bedside table when I get home!”

Mel Pengraeve, Head of PE and Outdoor Learning at third-placed Addington School in Woodley, called the final “a grand event at a stunning venue.” She added: “Not only is it so brilliantly organised, it’s great for our students to swim amongst students from other special schools.

“It really builds team spirit and gives students a lot of confidence. Once they’ve done such a huge competition as this, it’s then easier for them to go to other events and be at ease. It’s the best event all year. When they return to school it really encourages them in terms of reading and writing and just taking on new challenges in life.”

Student Daniel Skeates, 16, reflected: “It’s so good being with your mates in a team and it really builds your confidence. This place is massive! I’m going to put my medal in a display cabinet at home.”

Huge thanks go to teachers and students from Merefield School for travelling all the way from Southport in Merseyside, having won our north-west qualifying event.

Assistant Head Jo Sharp commented: “To be here is such a privilege. Our kids have been watching YouTube videos of Tom Daley competing here and have loved soaking up the atmosphere.

“Being here gives them a great sense of achievement. It has built up their team spirit and sense of sportsmanship. It makes them work so much harder to achieve that higher level and better themselves. We’ve got parents who’ve travelled down with us and it really adds something special to our school community.

“Back at school, the younger ones will ask them, where have you been? How did you do? How did you get there?’ and that gives them more of an incentive to try harder and do well in their PE lessons and extra-curricular sessions. It gives them something to aspire to.” 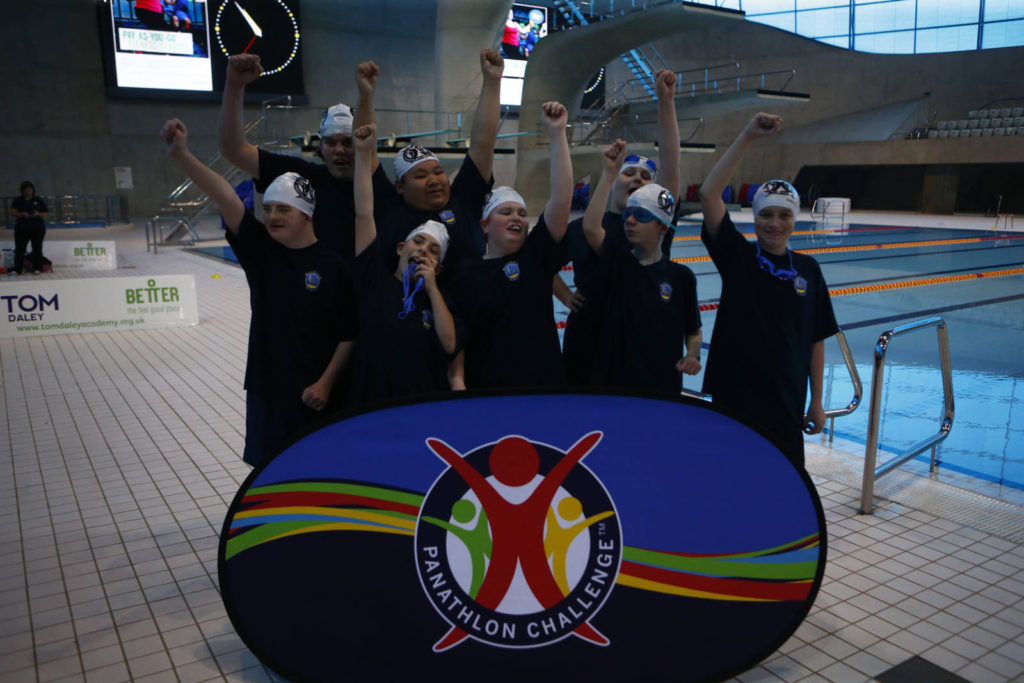 Reece Wells (pictured at the back in the team photo, right), who is in his final year at Merefield and is a sports leader, acted as a role model and support for some of his younger team-mates. “They all really look up to him – and not just because he’s such a big lad!” said Jo.

Seventh-placed Lonsdale School in Hertfordshire brought along one 13-year-old pupil who had never been on a school trip before he began competing in Panathlon. “This is now his third outing to a Panathlon competition and it has given him the opportunity to really grow in confidence, it’s been amazing to see,” said swimming instructor Heather Dean.

“This is an opportunity they don’t often get. Here, they get to bond because they’re in different classes and they get to experience healthy competition against similarly-abled young people.

“They go back into school at the end of the day and they’re all absolutely ecstatic, then that makes everyone else want to go. It makes them work harder in lessons and it reinforces positive behaviour, because they know they won’t get to go on the next trip if they misbehave!”

Katie Johnson, teacher at Shorefields School in Essex, highlighted the beneficial impact on her pupils’ communication skills and sense of togetherness.

“They’re just so pleased and proud and excited to be here!” she said. “It’s lovely coming as a team, it’s about that social development they get from it. Supporting each other is important because a lot of our children struggle with their social skills.

“Some of them get really nervous but here they support each other – that’s one of the things that has a huge impact, being able to understand each other’s emotions, which for our kids is really huge.” 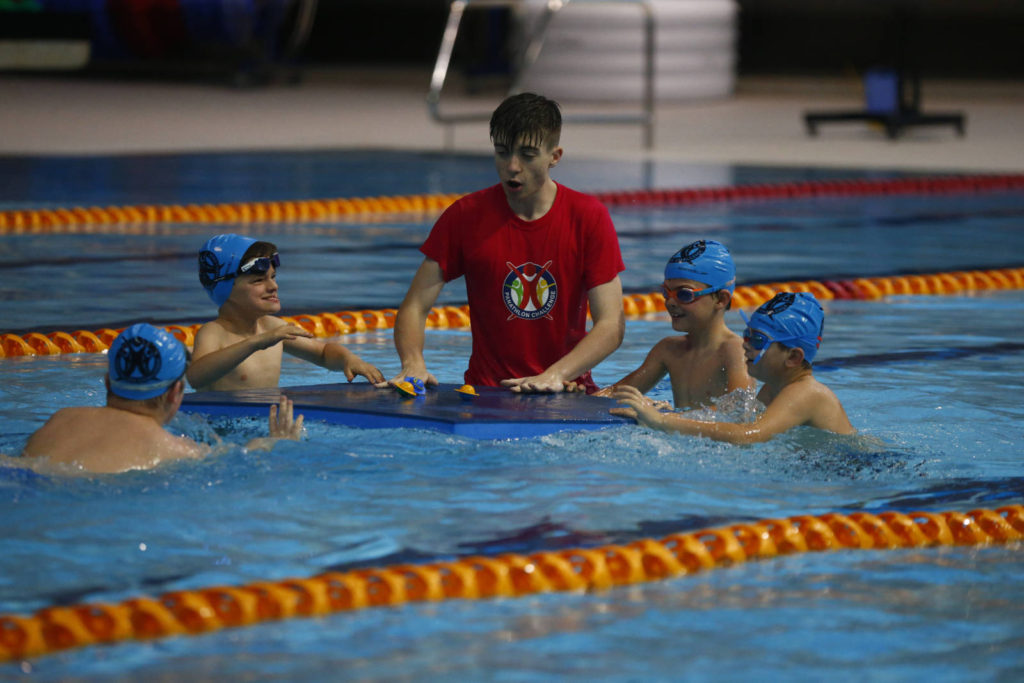 The impact on Young Leaders also should not be under-estimated and today’s leaders from Richard Hale School in Hertford were once again outstanding role models.

“There’s a raft of skills we aim to develop in our young sports leaders and events such as this give them the opportunity to put them into practice and really enjoy it at the same time,” said Steve Coote, Head of Year 12 at Richard Hale.

“It’s an exciting opportunity for them and I think you can tell by the way they act in the water the enjoyment they get from doing it. They’re motivating young kids to give of their best, and that’s so rewarding.” 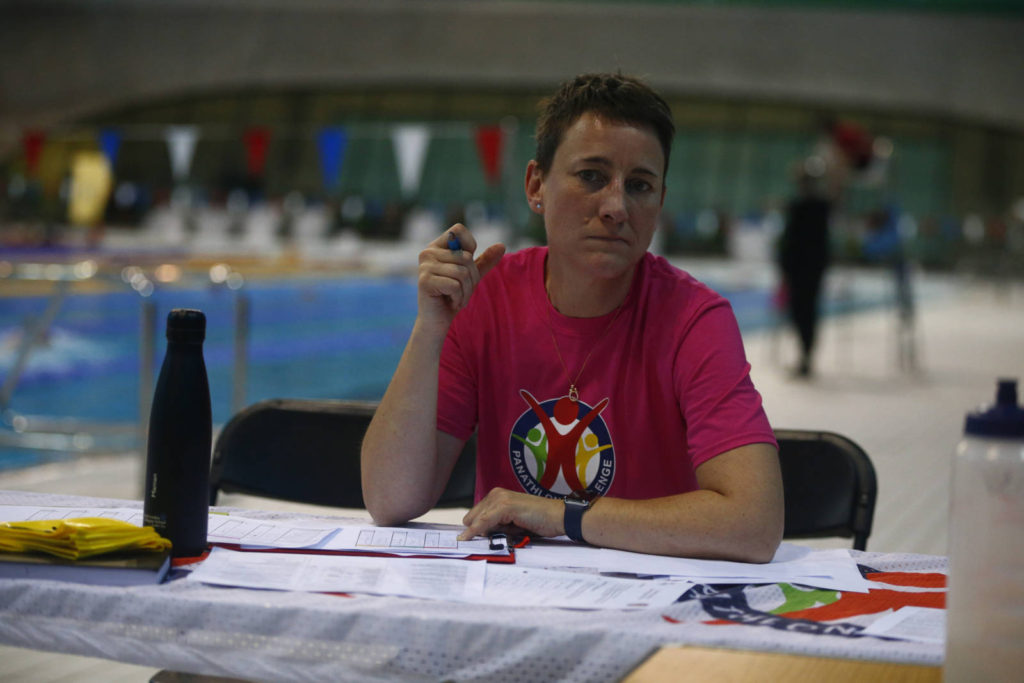 The inaugural U18 Special Schools Swimming Final was made possible through the support of Pentlands Brands. “We’re always happy to help this kind of event,” said their Business Architect, Fabienne Coulon (right). “It’s really good to be able to support people of all abilities, not just our elite swimmers.”

Also assisting with organisation and officiating on the day was Vera Silva-Furtado from Speedo, one of Pentlands suite of brands. She said: “This is my third Panathlon and I find it such a rewarding experience. The kids all give 100% and it’s so lovely seeing them smiling, enjoying being in the water and giving their best.”

Panathlon’s Chief Operating Officer, Tony Waymouth, said the event had been a great success in providing an appropriate level of competition for the special schools who attended.

“Large numbers of SEN children from across different types of educational institutions have taken part in our successful swimming programmes and our aim is to provide appropriate level of competitions for every school to be able to thrive. The special schools’ finals this year have been a tremendous success, enabling all participants to be able to compete on a more level playing field.”