Abby-Jo Wawrzewski led Lewisham to victory in June’s Panathlon London Multisport Plate Final at the Copper Box Arena, despite still being in remission from non-Hodgkin lymphoma.

The 15-year-old joined 200 other young people with disabilities and special needs from across the capital at our annual showpiece multisport competition at the iconic venue in the Queen Elizabeth Olympic Park.

Abby-Jo’s skill in the boccia event was key to Lewisham’s victory – in what was their ever London Finals appearance – over Islington, Wandsworth and Harrow. She has been learning boccia tactics from YouTube since her cancer prevented her taking part in football, swimming and athletics.

The teenager was diagnosed when she was 12 and responded so negatively to her chemotherapy treatment that she was not expected to survive. She had lymph nodes, huge swelling around her neck, and the cancer spread to her bones.

Only a rare form of treatment, which had never been trialled on a child before, brought her family any hope. It lasted seven months and has led to a slow recovery. In October this year she will have been in remission for two years.

Even before she got cancer, Abby-Jo had hyper-mobility in her leg joints and is on the autism spectrum. Remarkably, her legs have improved since the treatment, but several bouts of pneumonia contracted during treatment have brought on asthma and severely-reduced stamina.

“It’s been a struggle, but I’ve got through it,” she said. “Before I got cancer, I did football and any sport you can think of. I still do anything that I’m able to do, but it has affected my strength. I still have blood and allergy tests to see if anything has happened, but so far it hasn’t. 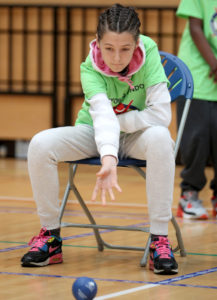 “I know my limits and sometimes I go over them, but I do it to get a medal. Boccia has been great for me and I’m captain of the school team. I’ve done loads of Panathlon events and they’re fantastic fun.”

Naomi Vann, Abby-Jo’s teacher at Brent Knoll School, said: “At no point has Abby-Jo ever given up or complained. For a long while all she could do was boccia, because you don’t have to run around. She’s getting stronger. She’s not right yet, but she’s getting there. She is an amazing child.

“Since she became ill she’s been unable to do anything apart from boccia, but she has become something of an expert. We’ve all been so impressed with her captaincy and her handle on the tactics.

“I’m so proud of her achievements. The fact that she’s alive is the biggest bonus we could have had. To see her come back, compete and take part is amazing.”

After hearing Abby-Jo’s story and watching her performances at the Copper Box Arena, Panathlon ambassador Liz Johnson, the ex-Paralympic gold medallist, labelled Abby-Jo as “the epitome of the Panathlon spirit.”