The 16-year-old (pictured left), who attends Brent Knoll School in Forest Hill, South-East London, has overcome stage 3 non-Hodgkin lymphoma and months of chemotherapy to become a regular Panathlon competitor, particularly excelling at boccia after learning rules and tactics from YouTube while she was ill.

Abby-Jo, from Crofton Park in Lewisham, received her prize from Panathlon Ambassador and Paralympic gold medallist Liz Johnson, who was assisted by Jack Gair, our 2015 Panathlon Young Leader of the Year.

Abby-Jo was chosen from a longlist of 17 individuals for the prestigious honour. Ruislip High student Samantha Holland was named runner-up, while Doucecroft School’s Tony Chaney and Jessica Howard from Oak Lodge School in Wandsworth both received ‘Highly Commended’ prizes.

Overall winner Abby-Jo’s treatment has made her asthmatic and left her with painful warts on her hands and feet. She also has hypermobility problems and mild autism, but none of that prevents her giving her all once the whistle blows. In June she was part of the Lewisham team to claim gold in the London Multisport Finals Plate at the Copper Box Arena. She also captains her school’s boccia team. 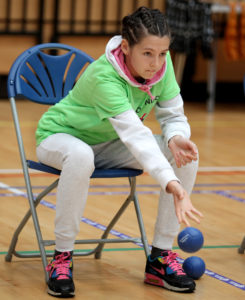 Initially, after her chemotherapy three years ago, Abby-Jo relapsed and the disease spread to her bones. She went on a rare trial, had a transplant and has now been in remission for over two years, although IBS has further limited her physical abilities.

She commented: “It’s really amazing to win. Sport and Panathlon competitions helped me to rebuild my strength after my illness. I knew my limits, though, and I’m still getting stronger now.”

Abby-Jo’s father, Robert, said: “Every year she brings out new challenges for herself and achieves them every single time. She has achieved a lot, but we take it at her pace.

“She loves all sports – it’s a case of me and her mum holding her back!”

Runner-up in the Outstanding Achievement category was 15-year-old Samantha Holland, a student at Ruislip High School.

At the age of eight months Samantha was diagnosed with a brain tumour that caused her to have hemiplegia, which presents as unilateral cerebral palsy.

Despite all of this, she is still keen to take part in physical activity and in particular Panathlon events, seeing it as a key part of the wellbeing programme she is on.

Samantha became involved in Panathlon through the multisport programme in 2015 as a member of the Hillingdon team and has competed regularly ever since. She particularly loves table cricket.

Samantha said: “This feels amazing! I just love getting involved in sports and helping other people enjoy their sport too. My favourite events in  Panathlon are table cricket and athletics races.”

Her father Gordon confessed himself to be “incredibly proud.”

Janet Edwards, teaching assistant at Samantha’s school, added: “She always strives to be independent and helps other children who have disabilities. She is friends with everybody.  At Panathlon  she’s the one who rallies everyone, gets everyone going and supports everyone, winners and losers.”

Tony Chaney, from Doucecroft School in Colchester, and Jessica Howard, from Oak Lodge School in Wandsworth, both received ‘Highly Commended’ awards in the Outstanding Achiever category.

Tony has sensory processing difficulties, ASD and autism, and during his early education was only able to attend school for one hour a day, having been excluded, meaning no time at all for physical education.

Tony, 13, then joined Doucecroft, but he didn’t have a great deal of confidence and found joining in activities difficult, as any change to his daily timetable was stressful.

However, over time the school worked with Tony to improve this by playing basic games and doing a great deal of balancing activities. He has since taken part in various Panathlon events, including the Panathlon Swimming Gala, and is also on the school football team.

Tony said: “I’m very, very pleased and honoured to be here today. I’ve done 30 Panathlon competitions and they have been a very good, interesting and exciting experience for me. I enjoy boccia the most.”

Tony’s mother, Sally, added: “I am so proud. It’s astonishing to be here today. To see my son achieve things we thought he wasn’t capable of is thanks to Andrea. Through sport, he has found out he can achieve anything.”

The Andrea in question is Andrea Griffiths, sports coach at Doucecroft School, who said: “Tony has helped the school win medals and trophies, and has gained a lot from being part of the Panathlon team, meaning his self-esteem and confidence have grown, not just around sport, but in everyday activities.

“Panathlon events have shown him he can succeed and that his efforts are valued and appreciated. He is still polite, helpful and kind, but he is also confident, independent and believes in himself enough to always give something a go.”

Highly Commended award winner Jessica Howard has CHARGE syndrome and so is deafblind/multi-sensory impaired (MSI) with a hole in one of the structures of the eye, a condition affecting less than one in every 10,000 births.

Initially, she was very shy and talked to herself, but in the past 12 months she is signing much better and is easily understood, enhancing her communication and interaction skills.

Taking part in Panathlon has helped her confidence, as well as her interaction with staff and pupils, which has developed immeasurably in the last year.

She has also shown tremendous strength and resilience despite adversity, and has demonstrated to her peers at Oak Lodge and at Panathlon events that anyone can overcome any barrier if you put your mind to it.

Her mother, Flo Njeru, said: “If it wasn’t for Jessica’s disabilities, she would be the easiest teenager ever. She’s a real adventurer and loves things that give her lots of sensory input. She just loves life. Whatever sport is thrown at her, she just loves giving it a go.”

Jessica’s teacher, Dolapo Akande, added: “I am very proud of Jessica. She has improved in so many ways. She has been hugely excited about every  Panathlon event and thrilled to be involved.”

Helping to present the awards was 2015 Panathlon Young Leader of the Year Jack Gair. Despite being profoundly deaf and autistic, his list of sporting achievements is awe-inspiring and Panathlon helped kickstart his rapid development.

After competing in Panathlons at school, Jack later volunteered as a Young Leader at our events, as well as earning his BTEC Level 3 Extended Diploma in Sport, completing over 400 hours volunteering at community sport events and progressing on to a coaching apprenticeship delivering PE, after-school sport clubs and holiday clubs with the Coach Core programme, supported by Active Essex.

He has a huge list of coaching qualifications in football, football refereeing, futsal, gymnastics, fitness instructing, swimming, lifeguarding, squash and dodgeball, and has already taken up coaching roles in many of these sports, including work with Cambridge United FC.

Jack, now 20, is an inspiring role model and was delighted to get the chance today to reward others who are now following his own high-achieving path through Panathlon and into the wider sporting world.

Jack’s co-presenter was Liz Johnson, the Paralympic gold medallist swimmer, who commented: “Panathlon mirrors the experience of the Paralympic Games by creating that multisport environment where competition is key whilst experiencing new team-mates, venues and challenges.”

The awards sponsor, the Jack Petchey Foundation, has supported Panathlon’s work in providing sporting opportunities for disabled young people in London and Essex for 13 years. In March this year they handed over a cheque for £106,300, bringing its total investment in the charity to £700,000.

Hannah Cilia, Head of Grants at the Jack Petchey Foundation, commented: “It has been really exciting to hear all the exciting stories about today’s award winners. Our founder, Sir Jack Petchey, always says: ‘If you think you can, you can!’ His motto is certainly embodied by all of today’s winners.”

John Lewis Stratford City, hosts of today’s ceremony, has supported Panathlon since the London 2012 Olympic and Paralympic Games, donating over £50,000 to provide sporting opportunities to disabled young people in that time.

“Every time I’m at Panathlon, it’s so inspiring,” said Ruth Scharvona, Managing Director at John Lewis Stratford City. “We’re a company that believes in developing ourselves to be better.  Panathlon is about sport, but it’s also about growing confidence, so children develop themselves and that fits really well with our ethics.”

For a full set of photos from today, then please visit our gallery of images.