Competing at the recent Panathlon London Final was the latest stage in Abdul Khan’s remarkable journey from a marginalised young boy to confident, gregarious and talented teenager.

When he first arrived at St Giles School in Croydon from a mainstream primary environment, he had enjoyed precious few opportunities to fulfil what teachers saw as untapped sporting ability. It was Panathlon – and boccia in particular – that was to unlock that potential.

Abdul, who has cerebral palsy, initially walked with the aid of a walking frame at high school but used it reluctantly. He persuaded his teachers and therapists to allow him to use his wheelchair as his main means of mobility, and this gave him a renewed sense of freedom.

“That little 12-year-old who came to us from primary has changed incredibly and it’s the power of sport, but particularly this game, that has made that change,” said Fi Bell, Abdul’s teacher at St Giles. 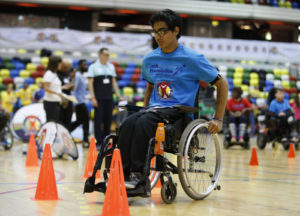 It took a couple of years to match Abdul’s obvious appreciation of the tactics and strategy to his technique for throwing the boccia ball. Once it ‘clicked’, his progress was rapid. He has captained the St Giles team for several years, leading them to second place in the London Youth Games and third in the Lord’s Taverners Schools Finals. He has also taken part individually in the Heathcoat Cup, reaching the semi-finals.

“We always sensed he could be a really good sportsman,” said Fi. “Boccia just excites him. He stays very calm in pressure situations and manages to make the right choices. He just understands the principles and tactics, which is a skill not everybody has. At Panathlons he does everything, polybat, precision beanbag, you name it.

“In primary school he was completely marginalised, but he came to us and has just excelled. He now volunteers at the local Mencap group, helping kids play boccia, and really enjoys it. He really enjoys helping the younger children around school too. Everyone loves him.

“What Panathlon has given him is a really, really good level of responsibility and self-belief. His self-confidence has gone through the roof, especially compared to when he first came.”

Abdul, 16, said: “Boccia is a really good thing for me, because when I was in my mainstream primary school I couldn’t get involved in sport and it was really hard. When I came to St Giles, my PE teacher, Miss Bell, told me about a sport called boccia. I was really interested.

“When Miss Bell saw me playing boccia in school she wanted to train me for the national finals. It’s been a real saviour for me. I just love it so much. Panathlon has given me the opportunity to do sports that I now love to play. It’s been really important.”

As he looked around the Copper Box Arena at the Olympic Park, before collecting his bronze medal for Croydon’s third-placed finish, he added: “It means the world to me to be here. Most disabled people don’t get the chance to do these kind of things so this is fantastic.”