Ten Year old Aaban Delawarally of Chadwell Primary School in Romford, one of our Outstanding Achiever Finalists, has picked up a ‘special recognition’ award for his development through sport, in Panathlon’s London Primary programme.

Aaban started at Chadwell Primary School in year one. He was born with Cerebral Palsy and when he joined school, he was either in his wheelchair or would crawl on the floor.

He has always been a cheerful character and determined to do well. Although Aaban faces many challenges, he always tries his best and has a smile on his face.

Aaban has progressed enormously since Year 4. With the help of support staff he has become more independent and now uses a walker to move around the school. In Year 6 he stopped using his wheelchair altogether.

He was determined to only use walking sticks by the time he left Chadwell Primary. Unfortunately, due to another operation and the Covid-19 virus, he was unable to achieve this goal however.  Aaban is a resilient young boy and we are sure that he will achieve this goal in the very near future.

He has shown great courage with the operations he has had to have to help improve his walking and always comes back to school with the smiley face and determination to carry on. He has overcome these difficulties purely through his happy personality and resilience.

Aaban as a student at Chadwell is a regular attendee at Panathlon days, and has developed a love for it. Sam Haywood, the sports coach at the school said, “to say he struggled was an understatement! Aaban is now used as an example to children in the school for pupils who struggle to start with, but showing that you can get there. He is a fantastic role model.” 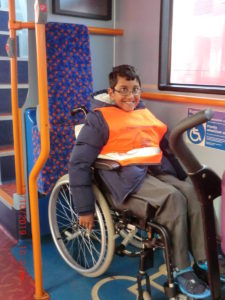 Sam went on to say, “being integral to the Panathlon team was such a great achievement for Aaban. It made him feel part of a team and not different from any of the others. The children worked together and looked out for each other.

Aaban has achieved so much during the past couple of years, from moving around the school independently using only his frame; going to lunch independently; and eating with his friends; working in class with less support. He has faced many challenges with great excitement knowing that he is improving his capabilities.

Aaban, regardless of his abilities, is always inspiring others’ through not only his attitude and passion to take part physically but also the desire in having a go at things. He has shown to his peers that he can always be positive even if he cannot fully achieve something successfully himself.

Chadwell’s involvement in Panathlon has flourished in recent years,  taking part in competitions not just in the Borough of Redbridge, but across the whole of East London.

The Romford School has progressed so quickly, by encouraging a philosophy which gives, ‘every pupil the opportunity to represent a team,’ which fits perfectly with Panathlon’s philosophy. 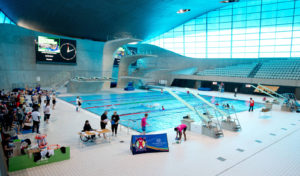 The impact on the children can be seen in the school’s desire to be part of the swimming gala held at the Aquatic Centre, Queen Elizabeth Park in January

“The school wanted to give children and outlet for lessons and this opportunity was too great, allowing pupils to develop their competitiveness, understand how to accept winning and losing, and improve their social skills and confidence,” said Haywood.

“Aaban exemplifies that, he has shown to his peers that you can always be positive, even if you cannot fully achieve something successfully.”

We congratulate Aaban on this award and Chadwell Primary for their on-going support of Panathlon.

Thanks to the sponsors of our London Primary Programme,