Mitchell Regan’s determination not to let his disabilities affect his sporting ambitions has had a dramatic ‘ripple effect’ on his school – and has earned him Panathlon’s 2017/18 Birmingham Outstanding Achievement award.

Despite his legs being severely affected by his cerebral palsy, which presents as bilateral spasticity, 10-year-old Mitchell loves PE and trying new activities.

His enthusiasm to be fully involved with his able-bodied friends inspired Dawn Gosling, PE Lead at Mitchell’s school Timberley Academy in Birmingham, to ensure that all disabled and SEN children in their resource base had the opportunity to represent the school at sport.

Timberley soon joined the Panathlon family, immediately offering Mitchell and his peers the chance to take part in new sports, have fun and win medals for the school.

“He kick-started it all,” Dawn said. “Every week he saw children from the mainstream school go up and get trophies and certificates for sport and he said, ‘When will I win a medal?’ That moment got the ball rolling – I felt it was important children from our resource centre got that chance as well. 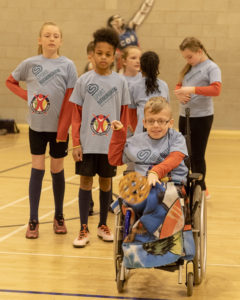 “Since we started Panathlon, he and others have got that chance to go up to the front in assembly. He’s changed the whole face of our PE as well, as we now do special sessions on Friday with the resource children to build up their confidence and give them something to suit their needs.

“The difference it made to Mitchell’s self-esteem and belief was astronomical. On returning to school with his medal he told everyone who would listen that it was the best day of his life. Since that first taste of achievement, Mitchell has taken part in many events including sports hall athletics, boccia, new age kurling and other Panathlon events.”

At the Panathlon Birmingham Primary Final in April, Mitchell commented: “It used to make me really sad when I couldn’t join in, but Panathlon lets me build up my skills. It’s quite exciting. Playing these activities is really fun.”

Dawn added: “Mitchell’s journey into the world of inclusive sport began when he was in Year 3. He is now in Year 5 and he has mastered the art of being a fantastic ambassador and role model for inclusive PE.

“He encourages his peers when they are physically challenged with a ‘Come on, you can do it,’ or ‘Well done, you’re doing really well’. Mitchell has made an outstanding contribution to PE and sports competitions with his ‘never give up’ attitude. He is a pleasure to teach and I look forward to him becoming a ‘Young Sports Leader’ when he is in Year 6.”

Dawn concluded: “Mitchell was absolutely ecstatic with his award. We are all very proud of him for his continuous effort and enthusiasm for school PE and sport. He truly is a fantastic ambassador for Inclusive sport. Thank you to Panathlon for making Mitchell a ‘super star’!”