Toyin, now 20, was part of the Croydon Panathlon team that qualified for the London Finals at the Copper Box Arena in 2016 and 2017 and was the Croydon team captain in her last year before she left school. She was also part of the successful St Giles boccia team who finished fifth in the National finals in 2016.

Toyin’s desire to stay involved with Panathlon and support boccia in the local community saw her volunteer as an official. Her expertise and experience saw her named Head Official supporting the Young Leaders and the new generation of players, some of whom were pupils at her old school St Giles. 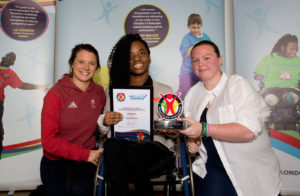 Back in 2015, Toyin was nominated for a Jack Petchey Outstanding Achieverment Award where she was named runner-up (see picture right).

Her story of achievement was significant, considering she was initially reluctant to take part in Panathlon. By the time she left school, she had become a sporting role model to her peers.

She has recently completed the Prince’s Trust Team Programme and aims to start her own business later this year.

Fi Bell, Toyin’s ex-teacher, also attended today’s competition with her new generation of boccia players. She said: “It’s a delight to see Toyin. She is still passionate about sport and involving herself at grassroots level. Our present students were pleased to see her and it was so nice to hear her offering them encouragement and nuggets of advice.”