Jack, 10, was part of the team from Hook Lane Primary who competed in the London Primary Panathlon Plate Final at the prestigious Copper Box Arena on Tuesday (July 2) – but few amongst the 140-strong field will have faced such adversity just to get to the venue as Jack.

The Year 6 pupil from Welling in Kent is severely autistic and does not cope well with being outside or in unfamiliar surroundings. Travelling on public transport is especially difficult for him. He also has issues with his gross and fine motor skills.

Karrie Cheeseman and the rest of the ASD provision team at Hook Lane Primary have worked extremely hard to get Jack to the stage where he was prepared to participate in Panathlon competitions. 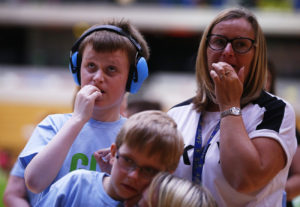 Having studied videos of the throwing games on the Panathlon website and social media accounts, Jack was motivated to attend local Panathlon events and overcome his fears about public outings. Attending our London Primary Final at the vast Copper Box venue was especially brave.

“When he was there the activities are so well tailored for him to participate – he was in his element with all the throwing games,” said Karrie. “He was anxious in the building, but the waiting is so minimal between each activity that he coped and participated really, really well.

“He completed each activity, then recognised his name when it was called and stood up to receive his award. That was a really big deal for him. He doesn’t stand up in front of crowds or cope well when people talk to him, so he was really proud of himself.”

The Hook Lane staff and Jack’s grandmother were all “really emotional” when he went to receive his GLL Outstanding Achievement award.

“We were extremely proud of him. We cried,” admitted Karrie. “Lots of us have known him since he was in nursery and have witnessed his progress over the years. For him, being able to travel, compete, do things in groups and speak to adults and receive an award… it’s unbelievable.

“He won’t stand up in assembly to get an award, so seeing him receive one in that big venue just shows how well tailored it was for him.”

Jack has now competed in two qualifying events and the final at the London 2012 venue – which is a far cry from what he felt capable of when first arriving at the school.

At first he refused to enter the school and had to have 2:1 support and variety of equipment (chew toy, weighted backpack, ear defenders, and a bear hug wrap). He could not cope with any sensory stimuli and his mum could barely take him outside the house. 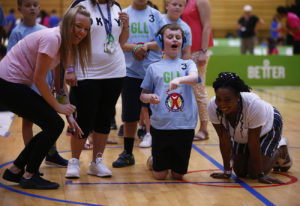 The school worked on a carefully planned schedule to build up his tolerance, starting with just walking to the school gates to greet his mum at the end of the day, then a shopping routine on Fridays, then a walk to the station, then a two-stop train journey.

“Jack was the child you always heard screaming and crying because he was so highly anxious in transitions and crossing thresholds,” remembers Karrie. “Fast forward, now Jack is in Year 6 (100% of his school day in the RP), he shops every Friday and the year before his first Panathlon competition we took him all the way to the London Eye and even got him on it!

“If you knew Jack even just two years ago, you would never believe that he would have managed all of this. He has been helping some of our newer children learn about Panathlon and his shopping trips by sharing his social stories and chatting.

“This year we had a child coming for the first time who is very much like Jack was. It has been lovely to see Jack helping “look after” this child by sharing his experiences and holding his hand through the practice activities.”