Panathlon’s very own “tabloid star”, Thomas Green from Brooksbank School near Halifax, has been named as our 2017 West Yorkshire Outstanding Achiever.

The 14-year-old, who was part of the Calderdale team that won our Yorkshire Multisport Finals in March, hit the headlines after his family threw him a ‘leg leaving party’ to say goodbye to his left leg, which was due to be amputated as it causes him intense pain due to a venous malformation behind his knee.

Four months on, the operation is yet to take place, as a new surgeon has now suggested a pioneering form of amputation. Known as a rotationplasty, the procedure involves taking the foot from the removed limb and grafting it to the bottom of his thigh, so Thomas’ heel would sit where his kneecap would have been, with the toes dangling down below. That foot then sits in a prosthetic leg, providing much more mobility than a conventional above-the-knee amputation. 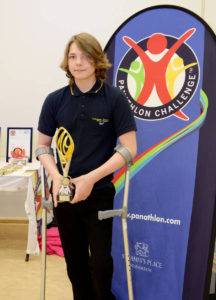 Thomas (left) is yet to decide whether to have a rotationplasty or a full prosthesis, but – inspired by competing in Panathlon events over the last four years – he has now set his sights upon becoming a Paralympic champion wheelchair racer.

He is currently raising money to buy a racing wheelchair by embarking on a sponsored challenge to climb the tallest man-made climbing wall in the UK; a considerable task with only one fully-functioning leg.

“You only have to give Tom an idea, and he will always say, ‘Yeah, I’ll do it!'” says Sarah Pearce, Brooksbank School’s Learning Support Assistant, who came up with the idea of a wall climb to raise money. Thomas’ school are also holding a dougnut sale, gin sale and race night to help boost the coffers.

After Thomas was presented with his West Yorkshire Outstanding Achievement award at the Bradford Primary Panathlon at University Academy in Keighley, his father Matthew said: “Without Panathlon we would have struggled to get Tom many sporting opportunities.

“It has given him the appetite to pursue wheelchair racing. He’s thrived and we’re really proud of him, but also grateful to his school and the charity for what they’ve done for him. I hope it has the same effect on all the primary age kids here today as it has had on Tom.”

On the day, two special competitors received West Yorkshire ‘Highly Commended’ awards for the determination and leadership they have shown at Panathlon events. 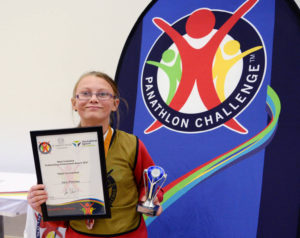 Zara Pinches, a profoundly deaf 11-year-old pupil at Lowerhouses Primary School in Huddersfield, was not part of the Bradford Primary competition that was happening on the day, but such is her passion for sport that she couldn’t resist joining in with the team from Girlington Primary (all of whom were also deaf). Zara helped them to a third-placed finish.

Zara (pictured right) won her award after captaining her team outstandingly at a Panathlon deaf boccia event earlier this year Although she struggles with her motor skills and has great difficulty communicating, she is an extremely keen learner, a great motivator and mad about sport.

She has taken part in not only Panathlon’s boccia event, but also football, sitting volleyball, dodgeball and rounders. “Sport just makes me happy,” said a beaming Zara.

Julie Markowycz, Teacher in Charge of the Hearing Impaired Specialist Provision at Lowerhouses Primary, added: “Academically, receptively and with her expressive vocabulary, Zara struggles, but she finds that sport is something she can really achieve in. She grabs any opportunity and, when she does it, her eyes light up.

“We put her in for the award because she has really grown in confidence. When we come to places like this she really gets stuck in and gives it everything she’s got.”

Like Zara, Shahayna is profoundly deaf. She can’t access speech and can only hear very loud environmental sounds. She uses sign language and lip patterns to communicate. 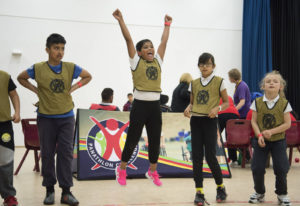 Girlington’s Teacher of the Deaf, Claire Hussain, said: “Shahayna is a role model for other deaf children in our school. They all wanted to come today because they’ve seen what Shahayna has achieved and they want to emulate it. She is so enthusiastic and determined to succeed at anything. She used to lack a bit of confidence, but now she says, ‘I CAN do it! We’re very proud of her.

“We never consider deafness to be a disability and we always look to challenge our deaf children. Panathlon has given Shahayna confidence and a chance to succeed, and it’s really good in terms of encouraging her to interact with other children, and not just deaf children.”

After collecting her trophy, certificate and bronze medal, Shahayna said: “I loved the parachute and kurling games the best. I love loads of sport, especially boccia and dodgeball.”

Two other Panathlon West Yorkshire award winners were unable to attend but will be presented with their awards at Brighouse School by Panathlon Chief Operating Officer Tony Waymouth. Firstly, Charlie Hurst was named as the girls’ Outstanding Achiever, with Billie Lambert winning a ‘Highly Commended’ trophy.

Charlie has Cerebral Palsy and spastic diplegia, and spends most of her time in school in either her wheelchair or her Kaye Walker. She had regular Botox injections from the age of two, but over the years these became less effective and so she had surgery about seven years ago on her hips and behind her knees. She still has physio daily and wears splints on both her legs, but these have given her independence and confidence.

She has been a very eager participant in boccia and new-age kurling since her transition to secondary school, attending extra-curricular clubs at lunchtime and representing Calderdale at the West Yorkshire School Games.

Charlie has also attended the Disability Leadership Academy day, where she gained the skills to lead others in boccia and new-age kurling. As a direct result of this training, Charlie now helps at the extra-curricular club on Friday lunchtimes with the younger students.

Billie has been participating in Panathlon for a couple of years. Until then her confidence was at very low ebb, as she was struggling to cope with her visual impairment in the transition from primary to secondary school, but being part of the Panathlon team gave her a focus and she became aware of the fact that she was a fast runner. This ability became more apparent when she joined Halifax Harriers, where she was competing against fully-sighted pupils and even her coach was not initially aware of her impairment.

She has now been given a formal classification (T13), which means she will compete against others with a similar field of vision. Her main events are 100 metres and 200 metres, and she is training within the standard required to qualify for the GB team.

Friday’s competition was won by Harden Primary School, who will now progress to the West Yorkshire Primary Panathlon next term. 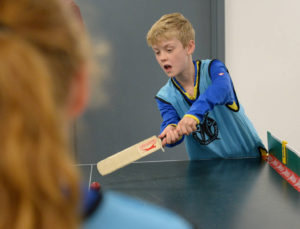 The school’s teacher in charge, Mr Weston, said: “All of our pupils have thoroughly enjoyed all the different activities. Every event has been really well introduced and led by the Young Leaders and they’ve participated to the best of their ability and shown teamwork throughout. It’s been a real success.”

Teacher Zafar Iqbal from Victoria School in Keighley, who finished in second place, reflected: “This was our first time at a Panathlon and until we were invited I didn’t know it existed, but it has made our kids realise how much fun they could have and what they could learn. It has been a real eye-opener for me and them!”

The day’s Young Leaders were supplied by Beckfoot Thornton School in Bradford. One of them, 13-year-old Chisom Marcus, said: “I liked helping out the kids and joining in with them in the activities at the end once they had finished competing. Helping little kids forget about their disability for a day and just play sport is so much fun.”

For a full gallery of images from the Bradford Primary Panathlon at University Academy Keighley, click the image below: 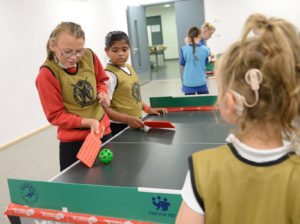 Thank you to Bradford School Games and Yorkshire Sport Foundation.