Two remarkable Panathletes from West Yorkshire have been added to our 2017 roll of honour as we celebrate this year’s highest achievers across the country.

Charlotte Hirst and Billie Lambert, who both attend Brighouse High School, have to contend with severe disabilities. But both girls have shown the strength of character, passion and determination to accomplish great things in the sporting arena, thanks in no small measure to Panathlon.

Charlotte has cerebral palsy and spastic diplegia and uses either a wheelchair or walking aid to get around. She walked for the first time only seven years ago after surgery on her hips and knees, followed by intensive physiotherapy. She still has physio now, but wearing splints on her legs has given her more mobility and confidence.

She attended the Disability Leadership Academy day where she gained the skills to lead others in boccia and New Age Kurling, enabling her to help out at the extra-curricular sports club on Friday lunchtimes with younger students. She also has swimming lessons to help build her muscle strength and is looking into starting wheelchair rugby.

The confidence she has gained and commitment she has shown to improving is a credit to ‘Charlie’ (as she is nicknamed) and the PE department at Brighouse High – and it’s a journey she has made through Panathlon. 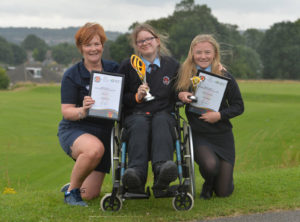 Charlotte commented: “It feels awesome to get the second highest award in West Yorkshire!

“I didn’t really get into sports until Year 7 until I started doing boccia, Kurling and Polybat. Since then I’ve been to boccia tournaments and loads of Panathlons. Now I’m a qualified referee too so I can teach others how to compete and the techniques and tactics. It’s pretty cool.

“Before Year 7 I never paid attention to sport as there wasn’t much I could really do. Now I can do loads of disabled sports and I enjoy it so much.

“My mum thinks it’s absolutely awesome and my grandad is over the moon as he’s a big sports fan. When I come home with my trophies he looks at them for ages.”

She initially struggled to cope with her visual impairment after transitioning from primary to secondary school, until – through Panathlon – she discovered a talent for running.

Her ability became more apparent when she joined her local running club, Halifax Harriers. She held her own competing against fully sighted pupils and her coach was not initially aware of her impairment. 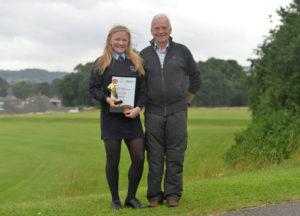 After a year of regularly getting annoyed with herself for drifting out of her running lane, she admited to her coach Brian Burgin (pictured left) that she was visually impaired. He admits he was stunned at the standard she had reached competing against her peers despite her disability.

Billie has now been given a formal classification (T13) which means she will compete against others with a similar field of vision. Her main events are 100 metres and 200 metres and she is already training within the standard required to qualify for the GB team.

Billie also dances in Freestyle, Contemporary, Rock and Roll and Street competitions, where she has been National U13 Street Champion for last two years. Billie has also been competing at National Level with her pairs partner in the Rock and Roll category where they finished first overall.

Billie commented: “I never had enough confidence to do sport on my own unless someone else came with me. I was a bit shy. But at Panathlon I saw children whose lives are much harder than mine. Witnessing these children being so happy when they’ve got such a different life to everyone else made me realise other kids have it a lot harder than me. If I’m lucky enough in the future I’d like to help kids like them find confidence as I have done.

“I’ve always had my heart set on being a dancer because my mum is a dance teacher and she passed on her passion to me. I started training to gain stamina for my dancing and that still means a lot to me, but I’m going keep pushing myself with my running, training and practising and see how far it takes me.”

Burgin, who is credited with launching the career of 10-time World Para Athletics gold medallist Hannah Cockroft, says the sky is the limit for Billie.

“She’s running as quick as some of these Paralympians at the World Para Athletics Championships, so she has a hell of a future ahead of her. We need to make sure we develop her. In 2020, with a lot of hard work and encouragement, she could easily be at the Paralympic Games. That’s how good she is – she just doesn’t realise it yet!” 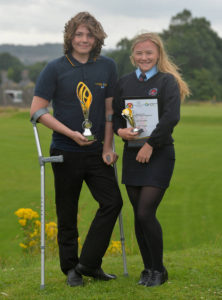 Despite going to different schools, Billie and our West Yorkshire award winner Thomas have become firm friends since they joined forces in the Calderdale team that won the Panathlon Yorkshire Multisport Final in York in March.

Billie said of Thomas’ many achievements: “I am so, so proud of him. Him being able to achieve what he does is amazing. He is an all-round lovely person and he deserves to win the West Yorkshire top prize. I don’t think he knows how good he is considering what he has been through.”