Panathlon and our funders Woodland Group hosted a party to recognise the talent and tenacity shown by Doucecroft pupils with autism – many of whom faced real adversity before being able to flourish in the sporting arena through our training, competitions and the wonderful support of the school’s PE coordinator Andrea Griffiths.

Panathlon’s ethos is deeply embedded in the PE and sport curriculum at Doucecroft, with our sports replicated during lessons to prepare pupils mentally and physically for the kind of challenges they face when they compete at our events.

To see a gallery of pictures from the event, click here. 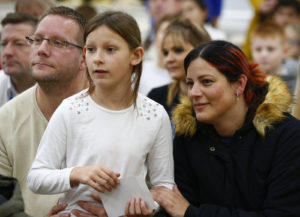 Our Woodland Girls Primary Outstanding Achiever was nine-year-old Chloe Wingrove (right). Her parents had to fight for two years to get her into Doucecroft. She arrived having never taken part in PE at her previous mainstream schools and having been separated from her classmates.

She has ADHD and autism and initially really struggled with turn taking, sharing and winning and losing. Gradually, though, she has developed a great love of sport, which has had a knock-on effect socially and academically. She now goes horse riding, swimming and wants to be a PE teacher when she’s older.

“It’s made an unbelievable difference,” said her father Leroy Wingrove. “All along she’s just needed the right access and opportunities and now she has those. Panathlon has been a key part of that; she just loves it.

“She’s always been outgoing but at her previous school she was ostracised. Her anxiety was sky-rocketing. But now she’s such an outdoorsy, sporty and socially active girl. She’s a child who wants to help everybody. If she sees a child on their own, she will naturally be drawn to that person. She will try to involve them and bring them out of their shell. She just wants everyone to be involved.” 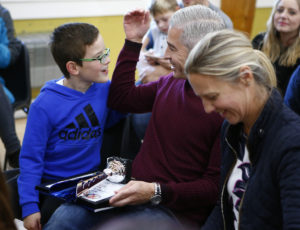 Our Woodland Boys Primary Outstanding Achiever was James Barrett (left) who, similarly, endured adversity as his parents struggled to find him the right school environment to suit his needs. He’s still only eight and Doucecroft is his fifth school. He finally feels at home.

“Panathlon has really helped build up his confidence, not just in sport but every day in school,” said his father Peter. “He hangs his medals above his bed at home and he loves looking up at them. On a daily basis he gets a reminder of his achievements.”

His mum, Nina, added: “Doing sport in school and building up to the Panathlon competitions helps regulate him, helps his concentration and focus, his listening skills and being part of a team.

“It definitely has a knock-on effect on the academic side. Supporting him with his anxieties and difficulties contains many different elements and Panathlon is a crucial piece of the jigsaw.”

James now takes part in his local Brentwood Junior parkrun with his dad acting as a tail runner, a shared experience they both love. He has also won medals in trampoling.

Doucecroft PE coordinator Andrea Griffiths added: “James is just an outstanding sportsman. When he first came to us, he wouldn’t do any sport, it used to take us absolutely ages just to get him on the bus. Now he is on every Panathlon trip and just loves them.” 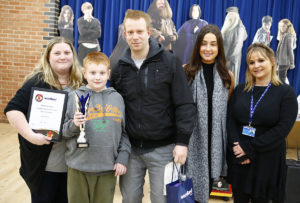 Richard Mills (pictured right), 10, and Ewan Ambrose, 12, both received ‘Highly Commended’ awards for their own achievements at Doucecroft staff and in Panathlon events.

Richard, who has autism and twisted hips that force his feet inwards, suffered plenty of setbacks before getting into Doucecroft and being able to access sporting opportunities.

“Life was very stressful for him,” said his mum Jo-Ellen. “Every day I’d get a phone call to come and collect him. Once I came to pick him up on a hot day and, as the other kids were doing PE outside, he was in a small cupboard on his own playing with Lego.

“He went to a Pupil Referral Unit, but after a tribunal we got him a place at Doucecroft. He’s now a happy child. He used to hate PE but now he does every single Panathlon. We even had to cut our holiday short to get home in time for a competition! It’s amazing to see how his enjoyment and confidence has grown.”

Ewan also suffered a hugely traumatic time in mainstream education before getting into Doucecroft, with high anxiety and regular “meltdowns”. He has developed double vision more recently, which has further hampered his confidence. Despite this, he has excelled at judo since the age of five, takes part in rock climbing, gymnastics and trampolining. 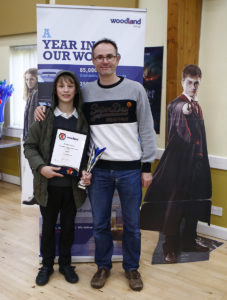 “Doucecroft and Panathlon have really helped him deal with things and relate to people in a more adult way,” said his proud father Clive. “It has a whole knock-on effect on self-esteem. It makes kids feel they are up to the challenge of doing something different. He now wants to be an environmental scientist and loves animals. Sport has helped him prepare for life as a young adult. The outings with Panathlon are all part of that journey.”

Louise Parkinson was appointed as Head Teacher at Doucecroft School in March. In just a few months in the post, she has observed Panathlon’s impact on her pupils.

“Panathlon’s biggest impact is on the self-esteem of the young people,” she said. “They come back and feel proud that they have really achieved, but more than that, it’s about the opportunity to see and work alongside other autistic pupils from different schools and match themselves against them.

“It’s also about being able to go to the bowling alley or swimming pool and simply be accepted. Nobody is going to question why they’re walking along the lines, as they like to do, or shouting things out. Learning to take risks, be OK if they don’t win, build that resilience and overcome their anxieties, is huge. They’re going to get nervous, but Panathlon enables them to channel that and develop ways to cope. It encourges that ‘I can’ attitude, which as we know acts as a springboard to success in many areas of their lives.”

Mrs Griffiths added: “These awards mean so much. These kids have been through quite a lot at their previous schools before they get to us. Many have never been included in PE before. As students, these awards will give them so much confidence and self-belief. They show them they can achieve and can do it.” 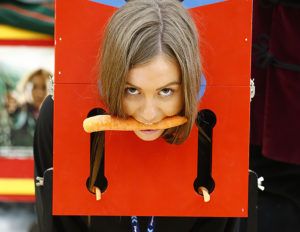 At the awards at Marks Tey Village Hall, the children, parents, teachers and guests from Woodland Group were treated to a Harry Potter magic show and a paint throwing competition outside which left several enthusiastic Woodland and Panathlon staff covered in (thankfully washable) colours! One Woodland employee, Katie-Louise Thompson-Friend (right), even got up on stage and had her head in a guillotine!

John Stubbings, Woodland Group director said: “It’s great to see the way Panathlon has expanded since we first started supporting them eight years back. The scale, the variety of sports offered, the different types of disabilities and impairments they cater for, the number of schools partaking; some of the figures are mind-blowing. It’s so gratifying to be here today and see the human impact Panathlon has day in, day out.” 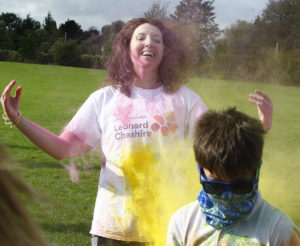 Panathlon’s Chief Operating Officer, Tony Waymouth, said: “These awards show how far Doucecroft have come since they joined us in 2015. The development process within the school using Panathlon’s model and sports has seen a transformation in the pupils’ outlook towards PE and sport.

“The large numbers of young people at the school using sport to overcome barriers and they way it impacts on their self-esteem, confidence, skill development and everyday life management is impressive. The school really does exemplify the key findings in our recent Impact Report and we look forward to further opportunities to allow Doucecroft pupils to participate and achieve.”