Finn, a pupil at St John’s Catholic School for the Deaf in Boston Spa near Wetherby, is a worthy winner of our ‘Outstanding Achievement’ award for overcoming severe difficulties to excel in our boccia, football and multisport competitions.

Due to his disabilities, particularly his deafness, he finds academic life a challenge, but sport – Panathlon in particular – has allowed him to compete alongside his peers, flourish and excel.

Panathlon events have broadened his horizons, giving him empathy and awareness of other children’s difficulties, and increasing his determination and confidence in overcoming his own. His fine motor skills remain a weak area but sport allows him to develop his gross motor skills, particularly his excellent hand-eye coordination.

Finn loves football and, after initial wariness about being able to include him successfully, Guiseley’s junior team in west Leeds have now embraced him, especially after he scored a hat-trick on his debut. He is also member of a table tennis club, and helps his mum re-home injured and abused dogs, some of which are brought in from Greece. He does ‘meet and greets’ with the dogs when they arrive at the kennels and helps to walk them.

Finn was presented with his award at the Panathlon North Yorkshire Multisport Finals at Fulford School in York.

Proudly holding his trophy, the 15-year-old commented: “Panathlon makes me feel very happy and excited. I’ve got my gold medals up in my room at home.”

His mum, Kim Knaggs, added: “Panathlon has been fantastic for Finn. It allows him to shine, which isn’t always the case in the classroom because of his disabilities. It allows him to show off, which he loves, of course! He struggles with normal schoolwork but with sport he can be the same as everyone else; in fact, better!

“When Finn was ill as a baby the doctors told me his body was essentially shutting down and there wasn’t much hope [of survival]. The experts later said they weren’t sure whether he would be able to walk. If only they could see him now either at Panathlon competitions or booting a ball over the fence into our neighbour’s garden 10 times a day!”

Abby Webster, Finn’s PE teacher at St John’s School, added: “He is a Panathlon veteran now and has been a fantastic leader at boccia and multisport events. He is also hugely competitive.

“Having sporting opportunities that anybody can access and being able to compete on a level playing field is a wonderful opportunity for him and all these children. We do have a school full of very competitive children so they particularly love these events.” 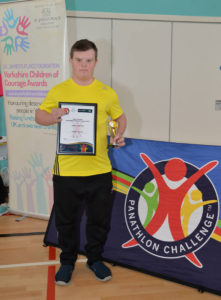 The second award winner on Monday was Dominic Laycock (pictured right) of The Dales School in Northallerton, who collected our ‘Highly Commended’ trophy. He has Down’s syndrome and has represented his school in numerous Panathlon competitions, including football, boccia and multisports, although his particular passion is swimming.

Dominic’s list of sporting achievements is remarkable, most notably the time he saved a young person from drowning at his local swimming pool by diving in and taking them to the side. He has also reached Level 4 in diving. He plays in defence for Middlesbrough FC’s Down’s Syndrome side and has been team mascot many times for the first team, leading them out before games at the Riverside Stadium.

On his act of heroism at the pool, Dominic said nonchalantly: “I saw they were drowning and I just jumped in. It made me feel proud afterwards.”

Lynn Watson, Advanced Teaching Assistant at the Dales School, commented: “We are really proud of him back at school. All our students are really competitive and Dom is right up there amongst the most competitive of all. He is a role model to other students and Panathlon really allows him to express himself and show off his talents.”

In attendance on the day was Jonathan Coe (pictured with Finn below) from the Ovingdean Hall Foundation , who provide funding for Panathlon’s deaf programme. 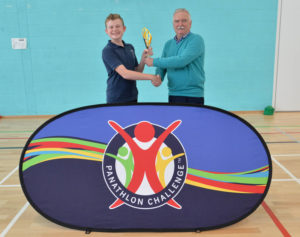 He was particularly delighted to see Finn receiving his ‘Outstanding Achievement’ award for overcoming his lack of hearing to prosper in the sporting arena with Panathlon.

“Coming to any of Panathlon’s events such as this one, the benefits are clear to see. This just works. It’s wonderful to see Finn receive his award because St John’s is a school we have supported ourselves in the past.”

Heading into South Yorkshire, our Outstanding Achievement award winner for 2017, who was also announced at the end of the summer term, is 18-year-old Tom Ringrose from Maltby Hilltop School in Rotherham.

Before Tom, who has severe learning difficulties, became involved in Panathlon, he was really shy and reserved, and rarely participated in any physical aspects of the PE curriculum.

However, through Panathlon he has gained confidence and interest in sport, which have had a positive effect on his social development. He has now completed his PE GCSE and taken part in the South Yorkshire Cross Country Championships.

Tom has also recently completed a Level One Sport Leaders Award, where some aspects of the course were to deliver physical activities to others. This has now led Tom to start helping and leading his own fitness sessions at school for the other post-16 students.

He has become an outstanding role model to other students and is a Play Unified sport ambassador at Loughborough University, where he encourages others with special education needs into sport. He also plays football for his local team, Rotherham United Disability, on Saturdays.