There is no greater example of Panathlon’s galvanising effect on deaf and hearing impaired pupils than those at Great Baddow High School in Chelmsford.

The Essex school began its association with Panathlon when they provided young leaders to help out at competitions as part of the students’ BTEC Sport qualification.

Conversations with Panathlon COO Tony Waymouth followed, with Tony wanting to develop the idea of events solely for deaf children. Once the decision was taken to stage one in the South of England, Great Baddow HS were one of the first schools to accept an invitation.

Alicia Sudnik, the school’s Communication Support Worker, explained: “Communication with peers can sometimes be difficult without communication support, but Panathlon enables our students to access sport with similar-aged children and communicate without the additional support from adults.

“Panathlon events are always well organised and led. They have ensured we can access the events, providing them at various locations, as well as during the school day. Often our students rely on taxis to and from school due to living a distance from home, so we need to ensure they are back at school for pick-up.

“It has also been great to attend events that have been led by deaf students, who are role models for our younger students and provide a sense of achievement for them.

“Panathlon are great at giving us medals, even for taking part – I don’t know any other organisations that do that! – and offer all our students alternative sports such as boccia, which our kids love.

“Social skills when meeting new people are able to be put into practice, along with the feelgood factor about going somewhere new outside their everyday comfort zone.” 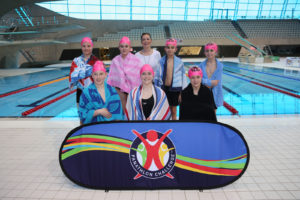 As it is a sports college, Great Baddow’s deaf students are offered all the sports that mainstream children can access, plus clubs before and after school and at lunchtime, as well as inter-school competitions.

“Competition can sometimes be difficult, but students can learn and reflect that in some situations you may not always succeed but it’s a great learning opportunity for life to take part and give it a go,” Alicia added.

“Panathlon events allow our students to celebrate their success as deaf students with the whole school and their parents when articles are put in Magnus after the event. They love to see their trophies on show with all the other trophies in the foyer.

“Within the school environments the children love to share their experiences and they get very excited when I am able to give them their next permission letter to attend an event!”

The Great Baddow HS students were particularly excited at being given the chance to swim in the Aquatics Centre at the Queen Elizabeth Olympic Park at the South England Deaf Panathlon Swimming Championships, where they won the secondary school event.

“The venues have been great,” Alicia commented.“The chance to swim at the Olympic Park was immense!”

A notable Great Baddow HS alumnus is Jack Gair, who was named Panathlon Young Leader of the Year in 2015.

“Jack was part of our BTEC leadership course, as well as part of our Resource Base for Hearing Impaired Students,” Alicia said. “Although he has now left us to do his apprenticeship, he still continues to support Panathlon events and is a role model for younger students.”