Treetops School in Grays, Essex, have thrown themselves so wholeheartedly into Panathlon over the last three years that our competitions now form the basis of their entire PE curriculum.

Treetops is a special school catering for children with learning difficulties, severe autism (around 80 children are non-verbal) and others who are deaf or hearing impaired.

Victory in the 2017 South of England Multisport Final and the Essex Swimming Final at the Aquatics Centre have been among the highlights of Treetops’ participation in Panathlon, but it’s the effect on the school as a whole which has been more impressive.

“When I first came to Treetops I was disappointed by the PE provision and the opportunities available here compared to mainstream,” says Ryan Jones, Assistant Head Teacher. “It was more of a sensory, play-based curriculum, with very few sporting fixtures or opportunities for interaction with pupils from other schools. I wanted to bring it a bit closer to a mainstream curriculum.

“When I came across Panathlon I was thrilled that there was an organisation offering those opportunities. It was a perfect match. It was exactly what I was looking for when I arrived at the school. That was back in January 2015 and we jumped on board later that year.

“There are quite a lot of sporting opportunities out there for children with physical impairments, but far fewer for those with learning impairments. You want children to be able to access something and compete in a friendly environment that is set at their own ability level, regardless of whether they win or lose. As long as they are able to feel valued and that they’re contributing to the team in a positive way. That’s precisely what Panathlon offers.”

Panathlon disciplines such as new-age kurling, table cricket and boccia have now been included in Treetops PE lessons as well as forming part of pupils’ entry-level qualification in PE.

“When they take the qualification, they will score really highly in boccia in a way they couldn’t have scored in football, basketball, rugby or athletics,” says Ryan.

“Students who started boccia in Year 7 are now in Year 10 and are very experienced, know the rules and can officiate their own matches. That familiarity is there is because of Panathlon. It’s made our PE so much more inclusive.” 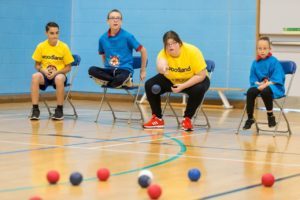 Hannah Dennis, PE teacher at Treetops, praised Panathlon’s influence on pupils’ confidence levels. “It just levels the playing field for them, as opposed to going to a mainstream event and getting beaten into the ground and disheartened,” she says.

“They can access all the sports, experience healthy competition and get that feeling of achieving something. It gives them that little bit extra outside of school and it makes them feel good.”

Ryan highlighted not just the “first-class” quality of Panathlon events, but also the variety as being an especially appealing factor to engaging in the Panathlon programme.

“The multisports suits our more able students, our hearing-impaired students love the swimming, and our severely autistic children can easily play in a new-age kurling competition,” says Ryan.

“My experience of teaching PE is you may have a county swimmer at one end, and in the shallow end a child who won’t put his face in the water. It’s almost impossible to meet everybody’s needs. Panathlon is pitched at just the right level for all.

“The swimming events are a completely different level to anything else out there at the moment, from the expertise of the people there, to including children with different needs, to the Young Leaders in the pool being so supportive.

“Panathlon’s expertise of organisation is first class compared to anything else we’ve seen. It gives a teacher confidence that you can go along and just monitor and support your team, whereas at an athletics or basketball event we’re often expected to referee as well. Panathlon is so well run and the Young Leaders are so good, you can go and just support your students and they are comfortable in the knowledge that you’re there alongside them.

“Students come back to school and are just itching to take part again. That enthusiasm spreads through the whole school. We’ve got a trophy cabinet full of Panathlon medals and trophies and we celebrate every success in assembly. It gives the children the chance to gain social as well as sporting opportunities.

“Now Panathlon sports are such a big part of our curriculum, it’s my hope Treetops will become a hub for students with learning difficulties at nearby mainstream schools. The Panathlon sports can be as good, if not better, than more established sports at bringing those children together.”