John Stubbings, Woodland Group Director and Company Secretary said, “The first time I read the nomination on Isabelle it brought tears to my eyes, Isabelle is such an impressive example of someone regularly facing new challenges to confront and overcome. A true winner embraces these challenges, just as Isabelle has.”

Eight year old Isabelle started at Shorefields School this academic year after being at a local mainstream school and due to the school’s involvement in Panathlon, PE Lead Vicky Beales sought to involve Isabelle.

Isabelle who has Learning disabilities, ADHD, congenital nystagmus, coordination difficulties and hypermobility, can communicate verbally but at times does find this difficult. With adult support she is starting to use Makaton signs. Due to this, at times she can lack confidence and be very shy.

Isabelle however is a very determined and her congenital nystagmus and co-ordination difficulties do not stop her taking part in PE lessons. Due to her congenital nystagmus, Isabelle struggles with depth perception and wears glasses to help support this. This means during certain PE activities like swimming she doesn’t wear her glasses so her confidence is reduced and will look more to adults for support.

Having overcome the anxiety of moving schools, new teachers, peers and routine, the way a Special School (Shorefields) operates differently to a mainstream primary school, Isabelle has had to adapt to these changes, make friends in her class and around the school. This in itself is incredible considering the big changes she has had to process.

In March 2020 the school took part in the Panathlon Swimming event at the London 2012 Aquatic Centre. Isabelle was asked if she would like to attend as the school felt this would help her confidence and she hadn’t been on a school trip with the Shorefields before.

Isabelle was extremely nervous when she arrived at school on the morning of the event, and during the trip to London going to the unknown, Isabelle however independently got changed for the event, this in itself a big step as it was something she has been working hard on trying to do during PE lessons.

Come event time, Isabelle was very, very scared and reluctant to get in the pool. She became upset and didn’t want to get in and it was like she was frozen to the spot, too scared to move. 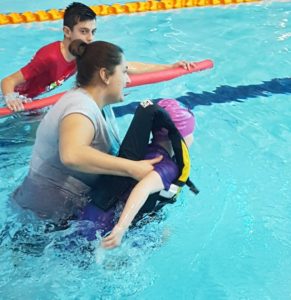 The Panathlon team were “amazing”, they came over and encouraged her and explained what she would do and how she would win a medal.

After around 10 minutes, Isabelle let her teacher support her into the pool but did tell her teacher not to let her go. When the whistle went Isabelle swam 10 metres to the middle of the pool with her teacher supporting her. Isabelle kicked her legs and moved her arms in a swimming action to help her get to the end of the race.

When Isabelle got to the end, all her friends and the other participants cheered her and gave her high fives. When asked if she would like to race again she said, “Yes!”

The next time Isabelle got straight into the pool with no hesitation. Isabelle completed 3 races and then had the confidence to say she didn’t want to do any more as she was tired. She then went to the edge of the pool and cheered her friends on, calling out their names and clapping.

Isabelle during the event struggled with depth perception especially without her glasses to aid her.

This means not only did she overcome the fear of swimming she had to deal with not being able to understand the depth of the pool and reply on teacher support.

This is a huge achievement as Isabelle had only been at school 6 months and to put her trust in the staff was a very courageous thing to do.

Isabelle has progressed so much since being at Shorefields. She is becoming more independent, working on her speech and her behaviour has improved at home. Isabelle’s family are so pleased with her progress and have seen a massive change in her behaviour and confidence.

Tony Waymouth, Chief Operating Officer of the Panathlon Foundation said, “Isabelle Evans is a worthy recipient of the Woodland Group Girls Outstanding Achiever Award and embodies all values and the ethos of Panathlon. Something which seems so small to some people is a huge achievement for others and in regard to the swimming occasion, I know the school staff was honoured to be there to witness Isabelle’s achievement.”

Many thanks to our sponsors of the Primary Programme in Essex.