A young boccia player with cerebral palsy received the Hassan Ahmed Memorial Sporting Achievement Award 2016 from Panathlon for the help and leadership he gives to other disabled children, as well as his own sporting achievements.

Jamie Brown, 16, of Croydon uses an electric wheelchair and his condition also affects his speech; he communicates using an iPad.

Despite his communication difficulties he encourages younger ramp users in the school and has even designed ‘Jamie’s Top Ramp Tips’ for these children.

His teacher, Fiona Bell of St Giles’ School, said: “I am so proud of Jamie and to be his teacher. He is a natural sportsman, gifted in terms of tactics and is great at football and boccia.

“Panathlon has opened so many opportunities to him; a whole new world. He’s a fantastic leader and always cheers on his teammates. 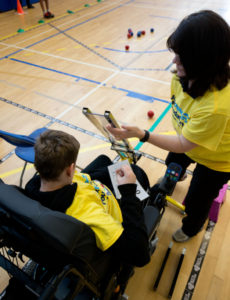 “He is captain of our Panathlon team and helped St Giles’ reach the National School Boccia Finals in Sheffield. He overcame the hurdle of being away from home for the night. We came sixth because of Jamie, our main man!

“He’s an inspiration to both staff and students at St Giles’ and is on his way to gaining Boccia England selection.”

After receiving his award from Paralympic gold medal-winning swimmer Liz Johnson at the Panathlon awards ceremony for London and Essex at John Lewis Stratford City, Jamie said he was “happy” to have won.

His mum Kerry said: “Jamie just loves sport. We can’t keep him away. And helping other children makes him even happier.

“He has achieved so much – more than we could have hoped or imagined, given his disability. He has been involved in sport for five years and it is an important part of his life.”

Wheelchair football was the first sport that Jamie got involved in playing both at school and a club. Panathlon competitions were a natural next step for him.

For the first couple of years Jamie competed in wheelchair slalom, but it was clear he wanted to do more for the team.

Jamie asked to be involved in boccia. He played for the school team in the Panathlon-run Lord’s Taverners Physical Boccia for schools across London. Panathlon programmes have increased his self-confidence and esteem immeasurably. 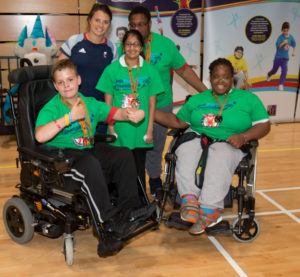