John Lewis Stratford City has supported Panathlon since the London 2012 Olympic and Paralympic Games, donating over £40,000 to provide sporting opportunities to young people since that time.

The store, which overlooks the Olympic Park, raised funds during London 2012 by asking members of the public for a donation to visit its Olympic Gallery, which has spectacular views over the Olympic Park.

It split the funds raised between four local charities, of whom Panathlon is one. The charities were selected by members of staff at John Lewis Stratford City, 85 percent of whom are from the Olympic boroughs.

“We’re very proud to support Panathlon and their work in providing kids with a range of disabilities a chance to participate in sport,” said Ruth Scharvona, Managing Director at John Lewis Stratford City.“It’s great to see their work come alive through events like the final at the Copper Box here at the Olympic Park. It was amazing. The noise, atmosphere, excitement and competitiveness – you really felt it in there.

“It’s terrific to see the Olympic and Paralympic legacy doing what it’s meant to do. We’re thrilled that our relationship with Panathlon, which started with London 2012, is still going strong five years later.”

Liz Johnson, Panathlon Ambassador and Paralympic champion (pictured with John Lewis Stratford partners at the top) said:“It’s fantastic to have the support of a commercial partner that really do care about their local community and support numerous charities like Panathlon to fulfil their potential.”

More recently partners at the store in Stratford have raised hundreds of pounds by running the Royal Parks Half Marathon, with Panathlon being their chosen charity. 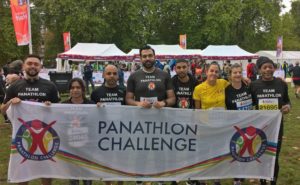 In October 2017, eight of the Stratford store each ran 13.1 miles -some experienced runners, some complete novices – and all getting fitter and benefitting the Panathlon charity at the same time.

Andre Ellis who co-ordinated the team said, “It was another fantastic Royal Parks Half Marathon and we’re all so proud to be running for the Panathlon charity. We witnessed the fantastic work Panathlon does when we visited the London Finals back in the summer, so we were all determined to do our best to help.”

The story even made the local Newham Recorder!