Joseph Gill from Barking and Dagenham is this year’s Panathlon’s Primary Outstanding Achievement Award winner for London for immense bravery in the face of his learning disabilities and personal tragedy.

The eight-year-old, a pupil at Southwood Primary School, suffered a brain injury shortly after birth due to contracting meningitis. This brain injury impacted Joe’s ability to retain information, both his short term and long-term memory were affected.

He has developed a love of sport thanks to his PE teacher, Stewart Stevens and taking part in competitions organised by Panathlon, the charity which gives over 22,000  young people with disabilities and special educational needs every year,  opportunities to engage in competitive sport they are so often denied.

Joe has made outstanding progress in the last few years; he has struggled with his independent skills and he would need support from his peers and adults to complete basic tasks, such as getting dressed after PE, remembering his coat and water bottle, listening and following basic instructions.

He also struggled to make basic conversation with his peers and would return to the same ‘safe’ topics to initiate conversation (things that he could remember – his teeth falling out or helping Grandad with his car were his favourites.) 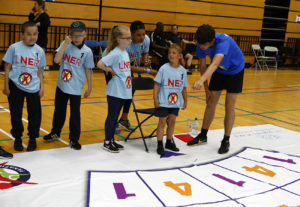 Joe’s independence has grown over the last couple of years as well as his confidence and this has definitely been helped through his participation in the Panathlon.

Teacher Stewart Stevens said, “He loves to come back after the Panathlon events and share information about the day and show off his medals!

He now shares information that he has remembered with family members and they can now join in with his excitement. He has learnt independent skills such as changing into his kit, remembering his own equipment and following instructions for each activity”.

“Through Panathlon Joe has learned how to play games within a team environment as well as individually. Panathlon has helped vastly with Joe’s independence, he now knows when & why we take turns in activities and the different types of equipment used for different sports.”

Since Joe has attended Panathlon, this has enabled his grandparents to come and support him and have commented that they didn’t realise that activities like Panathlon ever existed and fully support this.

During Joe’s life journey he has had to encounter several operations at GOSH to replace the shunt in his head (a tube that drains fluid from his brain), he has never been upset during this and in fact he can’t wait to get back to school and show his class mates & teachers what he has had done and show off his battle wounds.

Joseph Gill is a worthy recipient of the Outstanding Achiever award and embodies all values and the ethos of Panathlon.

Many thanks to our sponsors of the Primary Programme in London.