The smiles on the competitors’ faces at Panathlon’s London Final at the Copper Box Arena were all the Jack Petchey Foundation needed to remind them of the value of their investment.

The Jack Petchey Foundation fund much of our activity for young people with disabilities and special needs in London and Essex, as well as the annual Outstanding Achievement awards. They are our longest-standing funder, with our partnership going back 15 years.

Last November they announced a new extension to funding worth £123,465, bringing their total investment since 2004 to almost £1million.

Gemma Juma (pictured above), Operations Director for the Jack Petchey Foundation, was a rapt spectator at Wednesday’s showpiece London Multisport Final at the Olympic Park. It was with a special sense of satisfaction that she witnessed the enjoyment, camaraderie and sporting endeavour on show.

“It’s such a privilege to see these young people children competing at such a high standard and to know that the Jack Petchey Foundation’s support helped give them this opportunity to excel and shine,” she commented.

“To see the smiles on the faces today of young people who have achieved so much, worked and bonded as a team, and performed at the very highest level is just a pleasure.

“Sir Jack always says of Panathlon that it was one of his best investments in young people.”

Previous winners of the Jack Petchey Outstanding Achievement awards were present at the London Final on Wednesday (June 12) including Barking and Dagenham’s long-standing Panathlete, Georgina Hart. 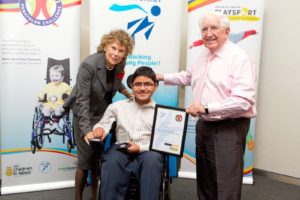 Another former award winner, Adil Ghani (who was runner-up in 2010 – pictured right with Sir Jack Petchey and Kate Hoey MP) attended Wednesday’s Final as a Panathlon Trustee. He said: “I have personally benefitted from the Jack Petchey Foundation’s years of investment into Panathlon. From being a competitor, I moved into being a coach when I left school and now have the privilege of sitting on the Panathlon charity’s board of directors and influencing change.

“I have developed as an individual and when Sir Jack presented me with a Panathlon award in 2010 he was inspirational. I have had a close association to both organisations ever since and have seen the fantastic work both do to develop young people.”

Gemma added: “It’s so great to see some of the same competitors grow and develop over time and what a difference it has made to their lives. To be able to come back and compete year after year in this London final and in other events is so valuable for them. “

Time and again Panathlon is highlighted as a significant factor in raising young people’s confidence and self-esteem. At the Copper Box, there was yet another example, when Teyla Sadik, part of the winning Enfield team, read the traditional Panathlon Oath before the competition began in front of over 200 fellow competitors, teachers, leaders and parents.

“I was a little bit nervous to start but I’ve been practising the speech at home which helped me a lot. I’ve never done anything like that before. I love coming to Panathlons and they really help my confidence.”

One outcome that the Foundation is particularly proud of is the development of the specially trained Young Leaders who guide, officiate and keep score in each discipline of the competitions.

The Young Leaders at the Copper Box came from six local schools and universities and their dedication and diligence earned the praise of Liz Johnson, Panathlon’s Ambassador and three-time Paralympic medallist.

“It’s great year on year to see the competitors come back better and stronger and honing their skills,” she said. “But for me one of Panathlon’s most successful by-products is the Young Leaders. It requires a new intake every year and I’ve noticed in other areas of my life that one of the biggest things previous generations have missed out on is that level of integration that’s so authentic and natural. 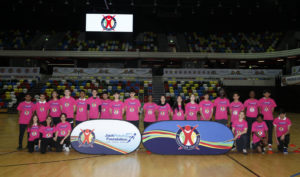 “What Panathlon really provides is that exposure to difference – whether that’s age range, gender or disability. People who have and don’t have disability mix together on a completely normal level. Actually, there are no issues and people converse as we should, like human beings. There’s a level of mutual respect, admiration and trust. They are treated like peers.”

Young Leaders perform their duties at hundreds of Panathlon competitions up and down the country, and even outside of the M25, young disabled competitors have benefited indirectly from the Jack Petchey Foundation’s funding in London and Essex.

The Outstanding Achievement awards model that they helped start in London and Essex in 2008 is now replicated in many other areas of the country where Panathlon’s programmes are now well established, such as the West Midlands, Suffolk and Yorkshire.

It’s heartening, then, that the Foundation are in it for the long haul. As Gemma said: “We are committed to this partnership in the long term and look forward to continuing to develop it to give more and more young people these priceless opportunities.”