Malik and Lina Berbiche, who both lost limbs in a bus crash, were two of Panathlon’s brightest stars in 2015/16 season.

The siblings from Uxbridge are about to enter their fifth year of Panathlon competition. Both competed for Hillingdon in our London Multisports Final at the Copper Box Arena at Queen Elizabeth Olympic Park in June.

Malik, 12, who goes to Harefield Academy, read the Panathlon oath alongside our ambassador, Liz Johnson, before the competition began (pictured above).

He said: “I felt nervous as the Copper Box is such a big place, but once I’d started reading it, I was OK.

“It’s like a dream. I never knew that I’d be able to come and play where actual athletes competed during the Olympics.

“I’ve been competing in Panathlons for four years. It’s given me so much confidence and my ambition now is to become a Paralympian.” 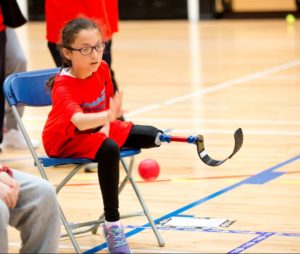 Lina (pictured right) added: “Panathlon is great fun and such a brilliant opportunity for us. The table cricket and polybat events are my favourites. I’m going to put my medals somewhere safe in my bedroom!”

Looking on, proud mother Sannia said: “Malik did brilliantly saying the oath, as normally he’s a shy boy. He is very sporty and wants to be a runner in the Paralympics. Lina is usually not very sporty; she’s more of a ballerina! But once she arrives, she’s always really excited.”

Back in April, Malik and Lina were recognised for their bravery at the St James’s Place Foundation’s inaugural ‘Children of Courage Awards’ in London’s West End.

Malik lost his left leg and arm in the National Express coach crash in January 2007, while Lina lost her left leg.

Their courage in recovering from such injuries to star regularly in Panathlons was one of the reasons that Hillingdon qualified for the London Final for the first time. They were both integral to the Hillingdon’s team success at the ‘semi-final’ at St. Mary’s University in March.  Lina threw a decisive boccia ball at the semi-final and Malik did a similar job in a play-off in the Final at the Copper Box Arena in June.  Both are inspiring to their team-mates and teachers alike. Keep it up, see you next year! 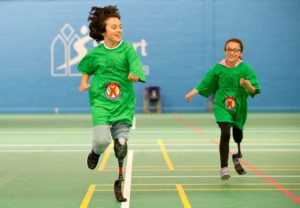