The Abbeymead School pupil, who has spina bifida and mild hydrocephalus, has been taking part in Panathlon events for two years and starred in the first ever Gloucestershire Primary Swimming Panathlon in May.

McKenzie, who cannot compete yet in external sporting events due to his age, said of his award: “It feels really great to have won and been presented with the award by [Panathlon Ambassador] Liz Johnson.

“Panathlon has made me realise that lots of kids have disabilities and they too can be involved. I feel overwhelmed to be recognised amongst them all.”

Swimming has provided ideal physiotherapy for McKenzie, who had two major spinal operations at the ages of three and five, with the last one leading to complications and four further operations, which meant he was off school from October to Easter.

After the last spinal surgery he was left with weakness and pain in his lower legs, which means he now needs to use a wheelchair and the only activity he is allowed to partake in is swimming.

McKenzie has had swimming lessons from the age of three and a half, and has progressed through the levels well.

He now has one-to-one lessons with a swimming instructor at his local pool and trains weekly, swimming a mile each time.

Although it is hard work for McKenzie because of the pain in his legs, he always wants to keep going and this has been good for his confidence.

Without Panathlon, McKenzie wouldn’t have had the opportunity to represent his school in any sporting event, so it has been perfect for him in that respect.

His mother, Kerry, said: “This award will have such a positive effect on McKenzie. Panathlon has made him enjoy sport and accept that he and others can achieve through sport.”

In September later this year he is to participate in Parallel London by completing a 5km wheel in his chair.

Volunteers from St James’s Place Foundation were on hand to congratulate McKenzie at the Primary Panathlon at Hartpury College on June 19, as well as the runner-up in the Gloucestershire Outstanding Achiever award, Ryan Payne.

Ryan was diagnosed with Duchenne muscular Dystrophy at the age of three. On starting school, he was as physically able as his peers, but by Year 2 he was using a wheelchair all the time.

Dealing with the pain of his condition and accepting at such a young age that he was different from the others in his class were difficult. Ryan could see that as his peers were becoming stronger and more able, he was becoming weaker and less able to participate in activities, even those he did previously. With all of this to deal with, Ryan was often very anxious and lacking in self-confidence. 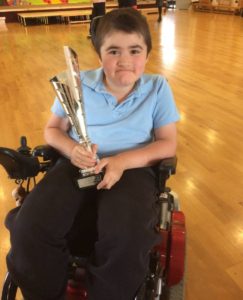 Moving through Year 3, Ryan (pictured left with his trophy) had quite a negative attitude about school, found it very tiring and struggled to cope with the increased work expectations. However, through negotiating with Ryan, his alternative afternoon curriculum emerged. This is now what gets him through the morning, knowing that he can do the things that he enjoys, frequently with a select few of his peers. Since participating in Panathlon, the activities he chooses to do are much more likely to be sport-based.

Ryan participates in physio exercises with his Support Assistant, Charlie Haddon, every day in school, which he frequently tries to resist or avoid. Mrs Haddon encourages him by reminding him that the physio helps to keep his muscles working well so that he can participate in events such as Panathlon and activities with his friends. His usual response is, “Can we play boccia later? When is Panathlon?”

He has also been taking steroids, since he was seven, to slow down his muscle degeneration. In those two years Ryan has suffered the miserable side effects of significant weight gain and mood swings. Ryan sees a counsellor on a weekly basis in school to help him learn ways to help to deal with these emotions. He has found the most effective technique for him is to talk about what he is feeling. Even at his most anxious, he knows that if he can keep talking about it, he can get through it.

Two further children were highly recommended – Dillon Campbell of Paternoster School and William Loughrey, of Picklenash Junior School, who is pictured above receiving his award in front of his team-mates.

Louise Colsell, the St James’s Place Foundation’s Head of Division Client Services, said: “This is my second year volunteering at a Panathlon event and it is a truly inspiring organisation.

“The enthusiasm the children have for the event, together with the thanks they express to the people volunteering is humbling.

“I am very proud that St James’s Place Foundation see this as a worthwhile charity to support and I will be back for a third year next year.”

Panathlon would like to thank our funders St James’s Place Foundation for their continued support.