Until two years ago deaf pupils at Mildmay Junior School in Chelmsford had limited opportunities to take part in competitive sport – or indeed any extra-curricular activities at all.

A call from Panathlon in early 2015 changed that. Deaf pupils’ achievements are now celebrated regularly by the entire school as they return from competitions displaying medals and trophies, and sharing their stories of competing in amazing Olympic venues.

It began when Panathlon offered to visit the school and train pupils in boccia ahead of competing in the inaugural Panathlon deaf boccia event in Braintree two years ago.

There they met Paralympic boccia gold medallist Dan Bentley and the children got a rare opportunity to mix, interact and compete with deaf children from other schools. Since then they have attended every one of Panathlon’s deaf events in Essex (including multi-sport, swimming, boccia and ten pin bowling) plus pan-disability events, competing against children with a range of disabilities and SEN.

“Panathlon is a great opportunity for all of our pupils to have the experience of competing and representing the school,” says Simon Ash, teacher of the deaf at Mildmay.

“They are always extremely proud when they return to school after an event with medals and certificates. It really makes them feel like they have achieved something amazing. 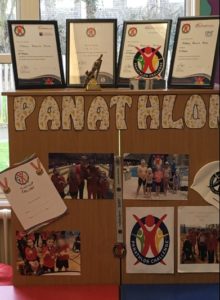 “In our resource base room we have a display [pictured left] which celebrates these achievements. The children are always keen to show visitors this collection and are always asking when the next competition will be, so they can add to it.”

The high point so far of Mildmay’s participation in Panathlon came in February at the first ever deaf swimming event at the Aquatics Centre in London’s Queen Elizabeth Olympic Park.

Teaming up with nearby Tany’s Dell Community Primary School, Mildmay entered five pupils, four of whom were non-swimmers, but still absolutely determined to take part.

“This was our proudest Panathlon moment,” reflects Simon. “They all got in the pool and tried their best, smiling throughout. We competed against five other primary teams and despite being mainly non-swimmers, we came second and earned silver medals!

“I would say to all schools with SEN, disabled or sensory-impaired children that they should definitely get involved with Panathlon and should try to do as much as possible.

“For us, the opportunity to go out of school and meet new people with similar needs is fantastic. Social and emotional development are so important for deaf children, and the chance to meet older role models – as well as new friends – is extremely rare for many of them outside of Panathlon events.

“The competitive sport element is also fantastic, as there are so few opportunities out there for many of our children to compete on an even level with other children.

“Finally, the range of sports Panathlon offers is great. They are so accommodating. If an event doesn’t fully meet the needs of the young people, they will make adaptations to help all the children be involved, enjoy and achieve.”