The 10-year-old pupil at New Oscott Primary School in Birmingham was born with mild cerebral palsy and suffers with diplegia of the lower limbs.

Harry has had serial castings involving botox injections in both legs followed by wearing casts for several weeks. He still wears splints every day and insoles in his shoes. He has a pronounced limp but does not let it affect his running as fast as he possibly can in competitions. 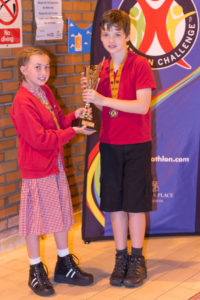 He commented: “When my name was called out , I didn’t know what to do, I was so excited. I know Neve won last year and we were all so happy for her, and now it’s me!

“I always try my best and today as part of the swim team I think the atmosphere and team involvement made me swim the fastest I ever have.”

Harry made his Panathlon debut three years ago which was the first time he had ever represented his school. He has enjoyed many successes since then, including a gold medal at the Birmingham Primary Panathlon last November.

“Harry is always helping and supporting her peers, often forgetting his own condition,” said his teacher at New Oscott, Lindsey McMahon.

“He also helps the younger members of our Panathlon team and infants in the school gross motor group to prepare and train for competitions. 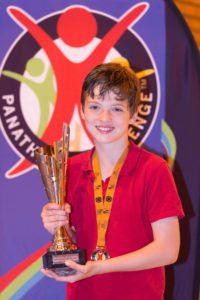 “He is a quiet, unassuming boy who, despite his condition, strives to take part in every physical activity made available to him in school.

“Harry’s confidence and ability have improved immensely through being in Panathlon and he now plays golf and football outside school.

“Harry’s introduction to such a range of activities and competitions from an early age through Panathlon has given him the skills and confidence to totally embrace any physical activities offered to him.”

Harry’s Outstanding Achiever award is supported by the Peter Harrison Foundation, and is fully merited for the wonderful attitude he has shown during his three years as a competitor.

His prize was presented after the West of England Primary Swim Panathlon on Tuesday at Handsworth Leisure Centre in Birmingham, where Young Leaders from nearby Stockland Green School helped in the water and with officiating.