Panathlon has helped Braidwood School for the Deaf in Birmingham overcome huge obstacles in providing quality PE and competitive sport for its pupils.

The end of a relationship with a neighbouring mainstream academy four years ago means Braidwood pupils no longer have shared access to their facilities including a sports hall, gym or football pitches. It has left them with serious restrictions on their provision of PE lessons and competitive sport.

For Braidwood PE teacher Ryan Sutton (pictured above left), the chance to engage his pupils in Panathlon’s deaf programme of sporting competitions has been “absolutely massive for us”.

He explained: “Since we can no longer share facilities we have struggled massively where PE is concerned. Any activities that we can join externally are really, really beneficial to us, so Panathlon has been wonderful for our students.”

Braidwood students competed for the second year running in our National Deaf Secondary Swimming Final at the Aquatics Centre in London in January. It is no exaggeration to say that that competition was a turning point for swimming at the school.

“We haven’t had swimming in our curriculum for seven or eight years because we no longer have access to the mainstream school’s pool,” explained Ryan. “We were delighted to be invited down to the national final last year and our head teacher came along with me.

“Because the kids loved it so much and the head could see how enthused they were, we were motivated to get swimming back on our curriculum. Now, every Friday we go to a local swimming baths and the whole school has access to swimming lessons.

“It has been received fantastically by pupils and parents. We would not be doing swimming had we not gone to that event last year. It’s had such an impact.” 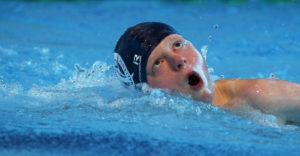 Through competing in our deaf boccia programme, Braidwood were invited to the Panathlon-run Lord’s Taverners boccia competitions and recently qualified for our West Midlands Final at the Nechells Wellbeing Centre in Birmingham on March 14.

“When we told them they were going to play in the next round, they were beside themselves with excitement!” revealed Ryan.

He added: “One lad who is part of the boccia team finds school extremely difficult. He’s someone that isn’t always in the classroom. He doesn’t engage in lessons and struggles to read or write. But after that event he was so, so proud of himself. There were photos taken afterwards with the medals and he wouldn’t let go of the trophy!

“I don’t think I’d ever seen him have pride in anything he’s done before. That pride isn’t always there in the classroom but he showed real resilience to get through two or three rounds and win an extremely tense final.”

“We’ve been to events in the past where they’re competing against children with various disabilities and, without sounding too critical, that can be a bit patronising for them,” he explained.

“The majority of our pupils do not see themselves as disabled. Their barrier is to do with communication and language rather than a physical impairment. It’s great at Panathlon that they get to compete against kids who are just deaf, the same as them. It makes it a totally level playing field.”