Tens of thousands of disabled young people have taken part in Panathlon events across the country and experienced the positive effect of our competitions, but our Young Leaders are often impacted just as profoundly as the competitors.

Students from Sir Herbert Leon Academy in Milton Keynes have helped out at multiple events over the years, many of them at the prestigious Stoke Mandeville Stadium, as part of their leadership modules.

Young Leaders are drafted in for each Panathlon competition from local schools and colleges and assist the smooth running of the day by keeping scores, helping children and guiding the competitors.

Callum Savill, a Year 13 pupil at Sir Herbert Leon Academy, is one of many success stories from the Buckinghamshire school and was selected by Boccia England as their ‘Young Official of the Year’ in 2018.

“I absolutely love to get involved with working with the children and love seeing their smiles when taking part.,” Callum said. 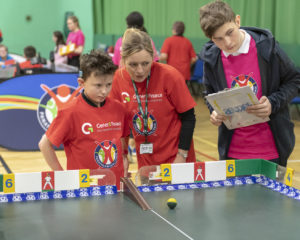 “It has given me lots of opportunities and to be able to tell future employers that I have worked with children with disabilities and to have done so many times makes me feel positive going forward after school.”

A promising footballer, Savill is a member of the Milton Keynes Dons youth set-up and wants to pursue a sports degree at university to aid his goal of becoming a P.E. teacher.

The 18-year-old hopes to use the knowledge and experience gained from being a Young Leader to continue working with children in sport.

“I am thinking about going to university to get a sports degree and already have a Level 2 football coaching qualification too,” said BTEC student Callum.

“I have always wanted to go into P.E. teaching because teaching children how to play football and rugby is just amazing. I have had this chance to help children and learn from them and I can juggle it with my coursework because I keep on top of it.

“To be able to pass my knowledge on is vital and to help children better themselves is so fulfilling.”

Callum’s school catchment area is in the top 2% of deprived areas in the country. His P.E. teacher and head of house, Paul Read, says becoming a Young Leader has turned his pupils into “role models” around the school.

“We come from a deprived area. These students don’t get a lot and this gives them something extra,” revealed Paul. “We take them out of their comfort zone and put them into an environment in which they have not been before, and it brings so much out of them. 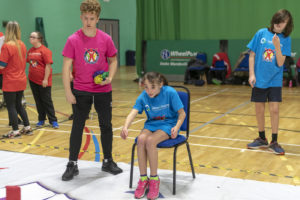 “You see them go from being a very closed character to opening up during the day. You see them with smiles on their faces and on the journey home they constantly talk about the experience.

“We have been so lucky with Callum and at the boccia finals he was named ‘Young Official of the Year’. For him it’s amazing but for us to see a student come through and do that was excellent. We see them as role models in and out of the school.”

Paul shed light on another former student who was epitomised the school’s association with Panathlon, who because of working at a competition in Stoke Mandeville wanted to pursue a career with SEN pupils.

Paul explained: “An example of the impact this charity has: going back to our first ever group of students, there was one girl who came over from sixth form and when she left here, she said she wanted to work with SEN students as she had really enjoyed herself.

“She has now got a degree and works with SEN students, all from doing this. She knew that was the career she wanted to do.”

The school’s leadership programme has been linked to Panathlon for a number of years and Paul insists that the platform the Young Leaders are provided with can only boost their future career goals.

“Our Young Leaders are our sports students and one of the units in their BTEC is a leadership unit. We take them from leadership skills in secondary school to here where students have different needs,” Paul continued.

“Their communication and demonstration skills are improved. It brings a lot out of them and brings them out as a person.

“Where they come from, they have a bit of swagger – and they have to – but you see their personality change here. It’s great for them to put it on their CV.”