The 10-year-old from Edgware, North London, was part of the Goldbeaters team who earned gold medals for finishing winners in the GLL group at our London Primary Panathlon Final at the Copper Box Arena in the Olympic Park on July 3.

Goldbeaters were one of 20 schools who reached the season-ending London-wide final by winning their respective boroughs’ qualifying events. It is the second year in a row they’ve reached the final and finishing in the top three in London is a significant achievement. 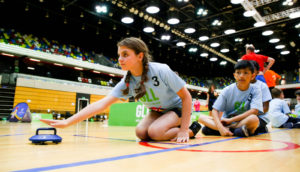 Molly took her place alongside 154 other keen competitors and took time out during the event to reflect on what Panathlon means to her.

“Panathlon has been very important for me,” she said. “I love that it’s not just ‘normal’ kids without disabilities here and you don’t have to compare yourself to them. You just come here and all the other children are like you.

“In normal [mainstream] competitions, you’ve got kids who are fast and strong and others who are slower. It’s usually the best ones who win and get picked for the school teams. Here, it’s more like you’ve got everyone starting from the same position and it’s much fairer and better for everyone.

“A lot of kids who try sport here might try basketball or curling in their life outside school. That’s what’s so good about it.” 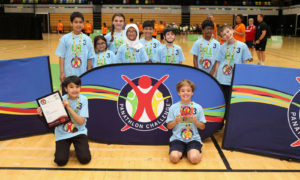 “We have two children in our team today who have cerebral palsy,” Chi said. “This has given them both the confidence to join in with our sports clubs at school – and both their parents have now become good friends.

“Some of them now go swimming in external clubs. It’s giving parents the confidence to allow their kids to do more activities, whereas in the past they may have feared they wouldn’t have been able to.

“Panathlon has had a ripple effect. The impact is amazing. When I look at these kids, I feel like a proud mum! We bring them up to the front in assembly and everyone stands and cheers for them. We let them bring their medals and wear their Panathlon t-shirts in, so they can walk around the school and be proud of what they’ve done. And so they should be!”