Team Dartford have demonstrated that the positive effects of participating in the Panathlon Challenge can be felt long after the day’s competition is over.

The team, which comprises pupils from Milestone School and Leigh Academy and reached the 2013 Panathlon Kent Final, have been inspired by Panathlon to explore further sporting opportunities within their schools.

“As an event Panathlon is superb for children to take part in activities with other disabled children, but also with mainstream children,” said Gill Moore, a teacher at Milestone School.

“We started working with this project about four or five years ago and we’ve been inspired to do our own mini-Panathlon.

“We invite local primary schools to come in and take part in sports against children with disabilities from Milestone School. We’ve also invited a school with a special autistic program. It’s nice to involve them as they really don’t have many opportunities to interact with other schools.”

“The funding from Panathlon has been great. They’ve provided us with all the equipment for table cricket and polybat – sports which schools can’t always afford, as they are enormously expensive.”

“Sport is important for children as it teaches them teamwork and they all enjoy being together and tasting success. Sport is an ideal way for them to do that.”

One child who was inspired by a taste of success at Panathlon is Bonnie, who first attended a Panathlon event four years ago. Having gone home jangling her medals, Bonnie’s parents encouraged her to take up running and she was soon spotted by a coach at Dartford Harriers, for whom she now runs.

“I don’t think this would have happened without Panathlon, says Bonnie. “I started at Dartford Harriers three years ago, but before that I started running here [at Panathlon] and I was quite good at it.”

But it’s not just the competitors who are inspired by Panathlon.

Ben Crouch’s first involvement with Panathlon was qualifying for his Sports Leaders Award while a pupil at Milestone School. Having left school he has now gone full circle as is back involved with Panathlon as a member of staff.”

“After I did the Sports Leaders Award, I left school and was out of the loop for a while,” said Ben. “When I got my teaching job I got in contact with Gill about getting involved again and I’m back here again at Panathlon!”

“My brother is disabled, so I’ve always had a bond with disabled kids and getting them involved with sports. It’s an area close to my heart and it means a lot to me.”

Ben works at a mainstream school, but sees the Panathlon Challenge as a way for disabled children in mixed schools to learn a lot about themselves.

“They can come out of their shell a bit more [through sport]. We have a lot of kids that get very nervous and bringing them here we see a different side of them. They are socialising and talking; it does a world of good for them,” he added. 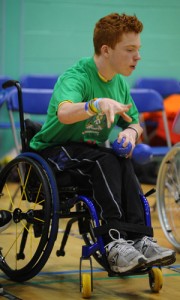 “As well as this side of the day they feel so proud to be representing their school and winning medals. All they talk about on the bus here is winning medals!”

Milestone School headteacher Nigel Jones, previously a head teacher of a mainstream school, cites events like Panthlon as on one of the reasons he chose to move to a school specifically for children with disabilities.

“I want to encourage children to pursue excellence,” said Nigel. “The definition of excellence is different for all children. What we are seeing here today at the Panathlon Challenge is children pursuing excellence through sport.”

Nigel also reiterated the significance of the skills that sport teaches children.

“A great example of one of the skills that can be learnt is patience. They are showing skills of patience by queuing to play table cricket or polybat; these can be transferred to a scenario such as queuing at the bus stop or at the shops. These skills are important in everyday life.”

Panathlon’s influence doesn’t stop with children who have never tried sport before. It also inspires those who have already found success with sport.

One such child is Charlie Randall – a pupil at Leigh Technology College, who is also a potential Rio 2016 Paralympian.

Inspired by the swimming of Ellie Simmonds at the London 2012 Paralympic games, Charlie started swimming for the first time and it turns out he’s quite good at it.

“Until a year ago I didn’t do any sport,” said Charlie. “The London Games were really inspiring as nobody was seen as having a disability, it was all about what they could achieve. I think Panathlon is a really good way of getting people involved in sport that they usually wouldn’t take up.”

Charlie is currently waiting to be graded by swimming’s governing body. He competes in the 50m, 100m and 200m breaststroke and 50m butterfly, but today Charlie has swapped his swimming cap and the pool for a ball and the boccia court.

“I’m here helping the Dartford team out with the boccia event,” says Charlie, “but I’m hoping to have a go at wheelchair racing later on.”

The Rio Paralympics may still be three years away, but Charlie’s story highlights the fact that, through events like Panathlon, children are introduced to sports that they might not usually participate in and stars can be born.”