Parents, grandparents, pupils and colleagues have queued up to pay tribute to “legendary” SEN Lead Barry Cornforth, who was recently named North Yorkshire Teacher of the Year.

Barry, who led Joseph Rowntree School to second place in last week’s Panathlon Yorkshire Final, has become a well-known figure at Panathlon’s secondary-age events in the north of England. He tirelessly encourages students with disabilities and special needs from his school to push their boundaries and fulfil their potential.

With typical modesty, Barry describes himself as “just a cog in the wheel at school”, but he admits his recent Minster FM North Yorkshire Teacher of the Year award at a ceremony at York Racecourse was a very special moment.

He said: “It was quite moving, because the whole evening was in aid of the York Hospice and I lost my wife to cancer a couple of years ago. It was poignant not only to win it, but to know that all the proceeds were going to the hospice.

“The school won it really, not me. I love the job, but to get recognised like that was a shock. I just go in and do my job. I’m lucky that the parents are really supportive and always come to watch these events.”

North-East native Barry was in the Army for 26 years before taking mental health and learning disability qualifications at York University in 1997. After a stint at Barlby High School he joined Joseph Rowntree when they opened the Wiltshire Centre Enhanced Resource Provision for Autism Spectrum Conditions.

Adrian Willis’ 13-year-old grandson, Rhys, has Asperger’s and has been under Barry’s wing since joining the school almost two years ago.

“Since my grandson has been at the Wiltshire Centre, we’ve seen such a marked improvement in his behaviour and his outlook on life,” said Adrian.“He takes part in more activities than he’s ever done before. At primary school he didn’t get that backing. That difference is down to Barry. 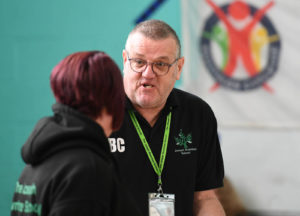 “He just gives so much to the kids and treats them all as individuals, and he knows them all so well. He goes that extra mile – providing outdoor activities and extra sports. It’s just all for the kids – little extras that he doesn’t have to do, he just does it.

“This is Rhys’ fifth Panathlon. He talks about them a lot. He is very competitive and he hates losing. He’s not sporty at all, but funnily enough, when he comes here, it does ignite his competitive spirit.”

Rhys added: “I like being with my friends and going up against other people. Today has been a lot of fun.”

Marnie Freeman-Hacker was also full of praise for the difference Barry has made with her son, Keegan, who has autism and an anxiety disorder. At one stage he refused to go to primary school for 18 months and was especially anxious about starting high school after his family moved to York from Essex.

“It was really hard for him to start here after being out of school completely for so long,” said Marie. “But Barry was really patient, got to know him and built up his confidence. He’s gone from a child that hated school to really loving school.

“Recently, when it was closed for snow, he was really upset. Barry is really special. He’s humble and doesn’t want any fuss.”

Keegan has now taken part in four Panathlon competitions. “He couldn’t get involved in sport at primary, because it was a mainstream school, but this is the first time he’s really shone at something and picked up some silverware,” said his mum.

Keegan said of Barry: “He always helps me with things I struggle with. He helps us get better at things we’re not as good at. He’s a legend, really! At Panathlon I like being with my friends and going up against other people – I’m quite competitive!”

There is no doubt Barry is the competitive sort too. After his team had lost out to Calderdale for the fifth consecutive time at last week’s Panathlon Yorkshire Final, he joked: “I said to them beforehand, ‘No pressure – just do your best,’ but of course deep down you really want them to win! We’ll get Calderdale one of these days!”