Panathlon are supporting a talented young archer from Hull who has special needs.

Finlay Clark, who was fifth in the Under-14 Outdoor GB rankings at the end of last year, has overcome significant challenges to excel at his chosen sport.

He was statemented autistic at seven years old and had delayed speech until the age of five. Now 13, he attends a mainstream school, who support his additional needs.

Having achieved Junior Bowman classification in 2018, Finlay has already achieved one target for 2019 in being named a ‘Junior Master Bowman’ by Archery GB. Only the top 1% of archers achieve this title and it entitles him to shoot at the British Masters in 2020. 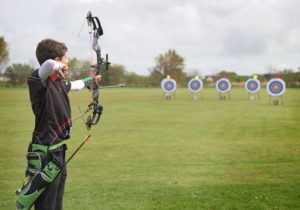 Finlay only began archery lessons in January 2016 at Wyke Archers club on the outskirts of Hull. He has since specialised in the compound bow category and now also attends Arrowhawks Archery Academy, staffed by some of the best coaches in the UK who identify and support talented athletes.

Since being supported by Panathlon, Finlay’s competitive schedule has intensified. He finished first in the Blackpool Open in late April as well as at the Bronte Archers near Leeds. This was a two-day event that involved 144 arrows each day shot from distances of 50 to 30 yards.

He will next attend the Development Programme at Lilleshall hosted by Archery GB, before competing in the Yorkshire Outdoor Championships and the Junior National Championships in June and July.