Panathletes Billie Lambert, Finn Knaggs and Shahayna Begum were among the award winners at the glittering Yorkshire Children of Courage awards in Leeds last Friday night.

Regular Panathlon competitor Finn Knaggs, 15, from Guiseley near Leeds, received a special recognition prize in the event’s 13-to-18 age category.

Finn (pictured above with performer Ray Quinn) was left with profound sensory neural hearing loss and complex epilepsy after contracting pneumococcal meningitis at seven months old. But he refuses to let his disabilities hold him back and has flourished through his love of Panathlon competitions, as well as football and table tennis. He received Panathlon’s North Yorkshire ‘Outstanding Achievement’ award in July. 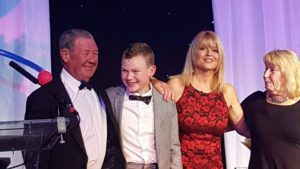 His mum, Kim Knaggs, commented: “What a fab night full of laughter, smiles and tears! Thank you so much for nominating Finn for this award. He said it was his best night ever and has proudly put his certificate and trophy on display in the front room and wants to show it to anyone who calls.”

Another success for a Panathlon competitor on the night was Billie Lambert, who is a pupil at Brighouse High School and is visually impaired. She was awarded the Yorkshire Child of Courage Sporting Achievement prize for the secondary-school age group. She is pictured above (in red) showing the trophy at Thursday’s Northern Multisport Final in York.

“I had no idea that I was even going to win the award. When my name was announced I just felt completely shocked and blown away! I just couldn’t believe it!” she commented.

Billie’s mum Claire Lambert said: “With everything that Billie has gone through it’s wonderful to achieve this award in recognition of her never giving up and pushing herself to her limits.

“For us to attend this special evening has given Billie so much confidence and made her feel extremely special. In fact we were all made to feel like film stars for the evening! I’m so very proud of her!”

It was while competing in Panathlon events that Billie discovered a talent for running. She became a member at her local running club, Halifax Harriers, and began competing against sighted pupils. Her coach, Brian Birgin, was not initially aware of her impairment, and was stunned by her progress when he learned of it a year later. (Billie and Brian are pictured left) 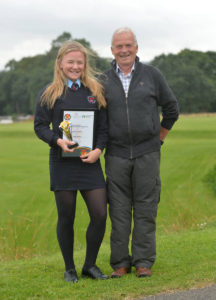 Billie has now been given a formal classification (T13) which means she will compete against others with a similar field of vision. Her main events are 100 metres and 200 metres and she is already training within the standard required to qualify for the GB team.

Billie was presented with her prize by five-time Paralympic gold medallist Hannah Cockroft, who used to be coached at Halifax Harriers by Birgin. 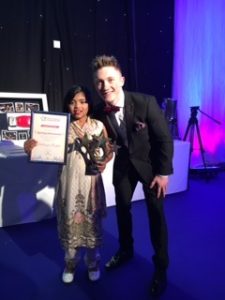 Winner of the Yorkshire Child of Courage Sporting Achievement prize for the primary-school age group was Shahayna Begum (pictured right), a pupil at Girlington Primary School in Bradford.

Shahayna, who also received one of our West Yorkshire ‘Highly Commended’ awards in July, captained her school boccia team to a second-placed finish in the Bradford Panathlon last year and they also finished runners-up in Panathlon’s West Yorkshire competition.

Girlington’s sports mentor, Amanda Simpson, said: “It was incredibly special to see Shahayna on stage accepting her award after all her hard work and determination.” Claire Hussain, Teacher of the Deaf at Girlington, added: “This is testimony to the fact that, when barriers are removed, deaf children can succeed to the highest potential.” 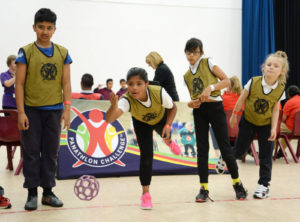 Shahayna reflected: “I was so excited all day and I’m having a fantastic time! I can’t wait to show all my friends and family my trophy and certificate!”

Kathryn Swales, head teacher at Girlington, said: “This represents all that is good about inclusive education. We could not be more proud of Shahayna!”

The Yorkshire Children of Courage awards were featured on the Made In Leeds TV channel. You can watch the video here. Select the October 16 bulletin and forward to 6 mins.