Honey, 11, is a pupil at Burnham on Crouch Primary School, while Dean, also 11, goes to Doucecroft School in Colchester. Both received their trophies on the outfield at Essex’s T20 Blast cricket match against Glamorgan at the CloudFM County Ground in Chelmsford on Sunday, with the presentations relayed on the stadium’s giant screen.

After being born prematurely and defying dire early medical forecasts, Honey was diagnosed with Spastic Quadriplegia Cerebral Palsy aged two. Her parents were told she would never walk or talk. 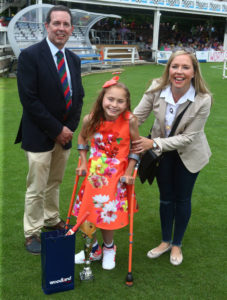 However through conductive education and therapy she started to stun the experts again. Her family raised £60,000 to send her to America for neuro surgery, then eye operations and tendon release surgery.

She still has deformities and contractures on her left leg and undergoes an exhausting daily physio regime. However, she has now almost abandoned her wheelchair completely, mostly uses crutches and sticks to walk, and is starting to take independent steps.

Panathlon competitions have been a key part of her recovery, restoring her mental and physical confidence. She is captain of her school’s boccia team and has developed younger team members to take on leadership roles when she leaves for high school in September.

After watching Honey receive her trophy in front of the applauding crowd, Honey’s mother, Rebecca Lock, commented: “Until the day Panathlon came to the school, neither we as parents or the school realised what disabled children could do. Panathlon opened our eyes.

“The mixture of sports awakened all these possibilities and Honey has taken them all and has had her opportunities and expectations extended. Today has been brilliant and a recognition for all and will provide a legacy at school for others to follow.”

Honey herself said: “This award is great! I wasn’t expecting it and certainly couldn’t dream of this when I started Panathlon. I have been rewarded for something I love.”

Outside of school, Honey works hard to raise awareness and funding for Cerebral Palsy, and is set to take part in a triathlon over summer. 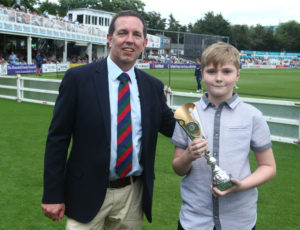 Standing proudly beside Honey was Dean Davidson, a veritable veteran of Panathlon events who was Doucecroft’s team captain when they finished third in the recent London and South East Primary Final at the Copper Box Arena in the Queen Elizabeth II Olympic Park.

Dean is autistic and was born with scoliosis of the spine which makes it hard for him to run for long periods or twist as it causes him back pain. He has grown from a non-verbal, aggressive and physically challenging child into a sporty, polite and caring young man in the two years he has been at Doucecroft and has been competing in Panathlon competitions.

Having previously been unable to work in a team environment, he now participates fully in Panathlon’s team ethos and those of other sports, even helping to train younger students in techniques and skills. Panathlon’s swimming events have helped him immensely as the water provides pain relief for his back.

Looking on at the CloudFM County Ground was his mum Jemma, who said: “I have never ever been so proud of my son.

“What amazed me today was there was no nervousness, no worry or stress. He is such a different child since being at Doucecroft and being involved in Panathlon. What an all-round change in my son there’s been. It has made him into who he is today. Three years ago I would not have believed this and what he has done today.” 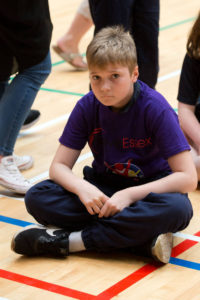 Dean reflected: “I am proud to have won this award and it is nice for my mum and grandma to be part of today.”

The Woodland Group, who selected our two Essex Primary champions, provides crucial funding for Panathlon’s delivery of primary competitions in the county. These awards build on the Jack Petchey Outstanding Achievement Awards for our older secondary-aged Panathlon competitors across Essex.

John Stubbings of the Woodland Group, who presented Dean and Honey with their awards, reflected: “The young people giving their all to the Panathlon Challenge never cease to amaze me. The standards are exceptional and the way these young achievers do not let anything hold them back is nothing short of inspirational. A lesson in life to us all!”

Panathlon wishes to thanks John and the Woodland Group for their hugely valued support. Thanks also to Essex County Cricket Club for kindly hosting our awards ceremony.