Harry Bowtell from east London first took part in a Panathlon in 2012. Despite having complex physical and learning needs, his confidence has rocketed as he has progressed from athlete to coach and official.

Harry (pictured above on the left with Liz Johnson and Charlie Garner from Doucecroft School) was diagnosed with Cerebral Palsy aged seven months. It gave him limited use of his left hand until an operation last summer to insert tendons gave him enough mobility and control for him to recently start driving lessons.

The 17-year-old is vision impaired due to nystagmus and wears special glasses to help his sight, as well as being on the Autistic spectrum.

He never lets his conditions hold him back and has grasped every opportunity that his old school, Hall Mead, and Panathlon COO, Tony Waymouth, have presented to him.

Boccia has been a passion of Harry’s ever since he discovered it through Panathlon. He captained the school team to gold in the Plate competition at the Copper Box Arena at the Olympic Park in London in 2016 and even led lunchtime practice sessions for his peers.

Since leaving Hall Mead for Havering College last year, he has seized the chance to build on his boccia skillset by undertaking the Level 1 officials course and acting as a referee at the Lord’s Taverners National Schools Boccia Final in Hatfield in April. 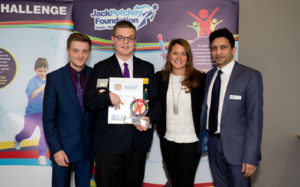 He has also passed his Level 1 multi-sport leaders course and will be getting involved with more coaching in the coming months, becoming even more of a role model to SEN children and young people.

Harry, who won a Highly Commended prize at our London-wide Jack Petchey Outstanding Achievement awards in 2016 (pictured above left), has started volunteering as an official at Panathlon competitions, including January’s Essex Swimming Final at London’s Aquatics Centre.

He said: “I love helping out with kids who have disabilities. It’s definitely something I want to do more of in the future.

“I think having disabilities myself means I’ve already learned a lot about what they need and the best ways to help them achieve. Panathlon has really grown my confidence and the courses I’ve been on have helped me find out what I might enjoy doing when I’m older.”

As a Panathlon competitor, Harry always took a lead role and inspired his team-mates. As he’s grown and matured it’s a pleasure to see him expanding that role as a volunteer young leader and official.