Competing in Panathlon events has helped the 18-year-old overcome nerves, anxiety and communication issues that result from his severe learning difficulties.

Since the student at Maltby Hilltop School in Rotherham has discovered a love of sport, his confidence has soared and he has achieved things he would never have previously thought possible.

He cowered away during PE lessons and struggled to interact with staff or his peers. When speaking, he used a high-pitched voice indicating he was anxious.

Now, when playing sport, Thomas uses his normal, deeper voice. Panathlon has kindled a love of sport that has inspired rapid social development. He has now completed his GCSE PE and competed at the South Yorkshire Cross Country championships. 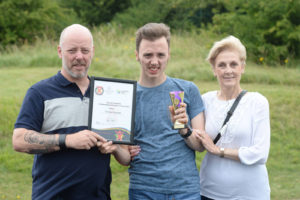 He also recently completed a Level 1 Sport Leaders Award, where some aspects of the course involved delivering physical activities to others. From there, he has now started leading his own fitness sessions at school for other Post-16 students.

He is a Play Unified sport ambassador at Loughborough University, a role which involves him encouraging others with special educational needs to play sport.

Thomas (pictured above with parents David and Melanie) now plays for Rotherham United FC disability team on Saturdays. Where usually he uses his high-pitched voice, on the football field he projects a deep voice to guide his team-mates during games.

Thomas’ father David Ringrose said: “It’s all a bit of a shock at the moment, I am trying to take it all in! I am so proud. Thomas has gone through a lot of things and has made such strides at this school. I am proud he is my son and today is just excellent recognition of that.” 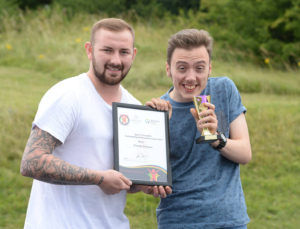 Maltby Hilltop’s PE Lead Jake Westlake (pictured left) reflected: “This is so well deserved. We at school can’t describe how he has developed through Panathlon, his PE, leadership and sport participation in general. It couldn’t have gone to a better bloke.

“Tom has become an outstanding role model to other students. Through Panathlon he has learned to put aside his communication and learning issues to understand working with his skills in a team setting and also take on leadership responsibilities as team captain.

“By completing the Panathlon that first year, Tom was overwhelmed by his achievements with a medal, certificate and a school team trophy. Here he gained confidence and self-belief which has driven Tom forward to more recent success both in and out of school.”