The 11-year-old, from Dagenham in east London, is constantly vulnerable to intensely painful “sickle cell crises”, anemia, swelling in his hands and feet and bacterial infections. When he was younger, the attacks were life-threatening and caused him to lose some of his fingers. He has regular blood transfusions, gets fatigued easily and his emotional wellbeing suffers.

Despite these difficulties, Romeo has thrown himself into competing in Panathlon events this year, allowing him to represent the school for the first time in external sport teams and contribute without becoming too fatigued.

Having made his Panathlon debut at Becontree Leisure Centre on January 25, he was enormously proud to help his school, St Vincent’s Catholic Primary in Dagenham, qualify for our London Primary Finals at the Copper Box Arena.

Primary Panathlon suits Romeo as his physical exertion can be managed to include rest time between each event. Activities such as boccia, new age kurling and precision bean bag also allow him to participate while sitting down.

Corinne Davis, the SENCo at St Vincent’s Catholic Primary (pictured with Romeo above), says Romeo’s determination to compete in Panathlon events has set a fabulous examples to his peers.

“Panathlon events are such a huge success in the school and now Romeo has shown how children from St Vincent’s can be successful in life,” she said. “This will further enhance the status of the Panathlon team at school and further develop the ethos of how everyone wants to be part of a team.”

Romeo is from a low-income family including two brothers who also have Sickle Cell Anaemia, plus one sister. 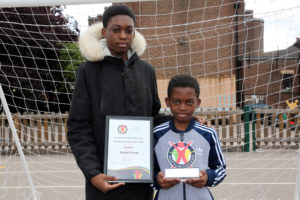 After seeing Romeo win the award, his 18-year-old brother Ritchie (pictured left) commented: “I’m speechless, truly speechless! My little brother, selected out of thousands participants in Primary Panathlon! This is so cool and so well deserved. Well done bro!”

Mrs Davis added: “Remeo is a young boy who deals with his condition on a daily basis and rarely complains or uses it as an excuse. He participates across as many aspects of school life as possible, and through all the ongoing pain is an extremely polite, well-mannered boy.

“Romeo works hard at overcoming the barriers his condition presents to him on a daily basis and it is important to him to try and fully participate alongside classmates.” 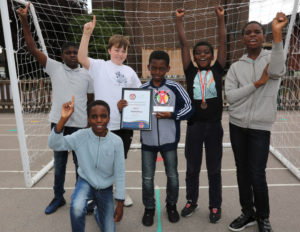 Romeo’s Panathlon team-mate, Marcus Brough (pictured here on left of Romeo), added: “Well done Romeo! You have shown St Vincent’s can do it. The whole team is so happy for you. You are a true representative of the school!”

Romeo finished runner-up in our London ‘Outstanding Achievement’ award category to Aminata Kalokoh, the eight-year-old from Sierra Leone who received her prize at the Copper Box Arena on July 5.

Stories of admirable heroism in young people like Aminata and Romeo are replicated across Panathlon’s primary programme and make the support of our funders The Wembley National Stadium Trust so treasured and valued.

The Trust has helped to grow Panathlon’s primary programme for the last four years, and provide sporting opportunities for thousands of young children.

The Trust’s Chief Executive, Stewart Goshawk, commented: “When we started looking for a charity to support in 2013 what we were looking for were organisations that were doing something special in disability sport and that had the potential to grow. We couldn’t have picked anyone better than Panathlon.”