Hafzah Tariq is described by those who know her best as “hugely competitive,” “a real fighter” and a “superstar”. It’s these qualities that have won her Panathlon’s 2017/18 West Yorkshire Outstanding Achiever award.

The 13-year-old pupil at Brooksbank School in Elland was born with a rare neuro-muscular disorder called nemaline myopathy. Doctors warned her parents she would never be able to sit up by herself and was unlikely to live past the age of one – predictions that have, happily, proved to be inaccurate.

Despite being confined to a wheelchair and suffering communication difficulties, Hafzah now not only attends a mainstream school, but has excelled in Panathlon competitions and every other sporting challenge that has been put in front of her.

Hafzah was introduced to boccia and table cricket by Brooksbank’s learning support assistant Sarah Pearce. Before long, she entered Hafzah into local boccia competitions, which she hugely enjoyed.

Since then the determined teenager has been a key member of the Calderdale team that has been crowned Panathlon’s Yorkshire multisport champions three years in a row as well as North of England champions for the last two years. Miss Pearce calls her “our boccia queen!”

Panathlon has given Hafzah the skills and confidence to pursue sporting ambitions outside of school too. Most recently, she won gold in the wheelchair slalom and precision beanbag events at the Disability Sports Yorkshire Junior Athletics Finals at the John Charles Stadium in Leeds. 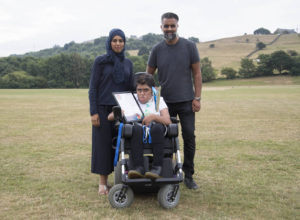 Hafzah was presented with her West Yorkshire Outstanding Achievement award in school assembly, with her proud and emotional parents, Shagufta Sharief and Mohammed Aziz Tariq (right), watching on.

Shagufta said: “Hafzah was introduced to Panathlon in Year 7 and she has absolutely loved it. She has just thrown herself into it, as well as all the tournaments and opportunities that the school present her with. She is a fighter. She is never sidelined because of her condition and if she has her mind set on achieving something, she just goes for it.

“We’ve known about the award for a week and it has been very hard not mentioning it to her. We just feel like every milestone in her life is an achievement for her, and this is so special.”

Father Mohammed Tariq describes his daughter as “very witty, cheeky and sarcastic” and thanked Brooksbank and Panathlon for “constantly pushing her and setting new challenges” for her to overcome.

“In our eyes, she’s a superstar,” he beamed. “Overcoming her disability, being included in a mainstream school and participating in these type of events… we feel like she has already achieved so much and has overcome so many challenges. We don’t want anything to hold back, we want her to skyrocket.”

Hafzah declared herself “very happy” with the award and modestly batted away suggestions from her teacher Miss Pearce that she could represent Great Britain at boccia in the Paralympic Games.

Miss Pearce said: “All I’ve done is provide the opportunities for her, it’s up to her to take advantage of them and she has seized all those chances. She’s done curling, boccia, disability athletics – the lot. She is such a determined character and I’m very proud of her.”

Hafzah’s Panathlon Outstanding Achievement award was made possible by Hays Travel, whom we would like to thank for their support throughout the 2017/18 academic year.