Thomas Clements enjoyed his first Panathlon victory in 2006, as a pupil at Marjorie McClure School in Bromley, South East London

During his Panathlon playing career, Thomas skills and self confidence improved year on year, due to the Panathlon Challenge inclusive approach. He ended up being the team captain and leading his school to success in winning the South London title at Crystal Palace.

Since competing in his first Panathlon event as a child eight years ago, he has become a great role model to the children in his school, having gone on to achieve even more success in coaching.

Panathlon competitor-turned-coach Thomas, re-visited the competition this June as Panathlon held its annual multi-sport final. Thomas and the team from Bromley took to The Copper Box Arena in London’s Queen Elizabeth Olympic Park aiming to be crowned Panathlon Champions 2014. 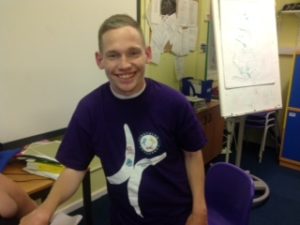 Thomas’s main role  is coaching the Table Cricket team, an event in which his team and borough stormed to victory at the Copper Box, gaining a 3rd place finish overall in London.

Thomas said: “It’s great to coach the team to success, especially at a Paralympic venue.”

Thomas was able to personally identify with the children, and had only praise for Panathlon and the competitive encouragement it once gave him. He said: “When I was younger I couldn’t wait for the Panathlon events, they were the highlight of my year. I loved competing against other students and being part of a team with other schools.

“Panathlon has given me the confidence to go on and do so much. It holds a place in my heart and I love sharing my experience and knowledge with the children I now coach. My teacher Guy Wilkins was an inspiration to me and I hope I can be the same to my students.”

He has now moved to Bromley College but continues to volunteer at Marjorie McClure every Friday. He is a qualified level 1 F.A. coach and so has now become part of the Panathlon funded coaching team in school. He coached and managed the under 13 team which won the heat earlier this year.

“I remember him as a 6-7 year old when he came to the school – he was not a good sport at all, hated losing, still doesn’t like losing, but he’s coped with both success and failure.

Through Panathlon and he’s now sending the message of being a good sport to others.”

Clearly proud of his achievements, Guy added: “Tom was a Sports leader, he embraced that as he went through school – he’s now a qualified Level 1 Football coach, running the after school sports clubs as a volunteer and looking to gain a Level 2 qualification.”

Guy’s final words were full of gratitude for the values Panathlon instils in competitors like Thomas.

“He’s a really good coach, with a set of values behind him – parallel to Panathlon’s own value structure – determination, courage, personal best and friendship