Freya Levy has flourished in numerous ways in the last six months – firstly in her role as a Panathlon intern but also totting up international sporting appearances in THREE different disciplines!

Freya spent four successful years in the GB women’s wheelchair basketball programme, including two living within the centralised training programme at Worcester University. She won two silvers and a gold medal at the U25 European championships between 2014-2016.

She has now started a new sporting adventure into the world of Para Ice Hockey and Wheelchair Rugby Sevens, and is set to make her international debut in both sports this month!

asildon Sporting Village. “From then I was hooked,” she says. “I love Panathlon and the ethos it promotes. I never had access to adapted sports in school like Panathlon offers and it’s clear there’s a huge demand out there and these kids want to compete.”

She continued to attend events in the last couple of years, when her basketball schedule allowed. She has become an official Panathlon Ambassador and a great role model for our competitors.

Freya reflects: “Basketball gave me everything. I wouldn’t be where I am today without the break in disability sport which basketball gave me. I got to travel the world with 11 of my best friends and call it a job, but it was the best and hardest four years of my life. It was amazing to represent GB and play in countries including Holland, America, Spain and Germany.

“When I left the GB programme in 2016 I was completely lost, but Panathlon picked me up, took me 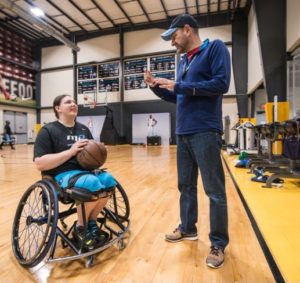 under their wing and changed my life.”

After being nominated by Panathlon, she was selected as one of 12 participants from around the world to join the Michael Johnson Young Leaders programme in Texas.

She says: “It was the craziest 24 hours! We had just won European gold, against Germany, in Germany and came back from 16-0 down in the first quarter. Eight hours later I was on a plane to Texas to meet Michael Johnson and spend a week at his outstanding training facilities!”

There the athletes were exposed to the environment of a world-class sporting institution while receiving training and education, as well as learning how to develop and maintain a career in sport. This includes exploratory education in leadership, life skills, cultural and community engagement.

“Without the support from Panathlon, I don’t know If I would still be playing elite level sport. It was a difficult year for me.” said Freya.

“The Panathlon charity employ me three days a week working across a raft of activity. It was the best move I could have made. Without Panathlon’s support from Woodland Group, paying for my post, this wouldn’t be possible, I honestly can’t thank them enough.

“When I went into work on my first day, I followed a Woodland Group lorry on the way. It was a sign, and I couldn’t be happier in my new role. Panathlon has opened doors for me that wouldn’t have been there without them. It’s changed my life.”

Her most recent switch in sports has up a very busy month. After being asked to join the GB Women’s Para Ice Hockey team, she joined a Team Europe training camp in April in Bergen, Norway, for in the run-up to the World Cup. 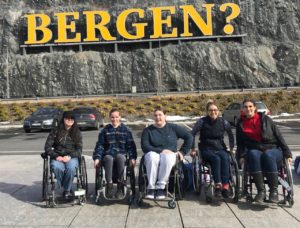 After an invite to attend a Wheelchair Rugby Sevens training session, she then found herself putting on an England shirt in an away game against France in Claremont-Ferrand and scoring her first international try! “It’s incredibly hard to explain how amazing it feels to have a rugby ball back in my hands and to be back in the rugby environment that I grew up in,” she says. 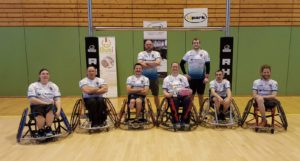 From there it was a quick turn around before she was off to Ostrava, Czech Republic, for the Women’s Para Ice Hockey World Cup, representing Great Britain against Finland, Sweden, Norway, France, Australia, Czech Republic, Croatia, USA and Canada.

Amazingly, GB and Freya won bronze, and the sport could be set for a huge profile boost should Women’s Para Ice Hockey be included in the 2022 Winter Paralympic Games. 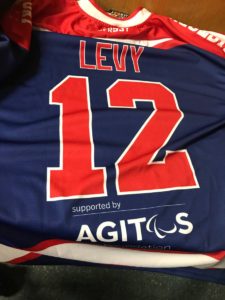 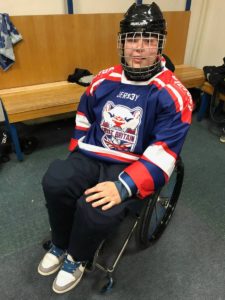 In what will no doubt be a busy summer for Freya, she is also taking part in the Superheroes Triathlon in August with other Panathlon competitors and friends, in which hopes are high of a repeat of last year’s great success.

Join Freya as one of the latest Celebrity Team Captains at this year’s Superhero Tri Series on 18th August 2018, find out more here.