Troy McIntosh from Hackney has received the Panathlon Outstanding Achievement Award for London for immense bravery in the face of his severe disabilities and personal tragedy.

The eight-year-old, a pupil at St Paul’s with St Michael’s Primary School, lost his mother to a heart attack last September and is now looked after by his grandmother.

He has developed a love of sport thanks to taking part in competitions organised by Panathlon, the charity which gives over 17, 500 disabled young people every year opportunities to engage in competitive sport they are so often denied elsewhere.

Troy’s sporting prowess has blossomed despite severe physical impairments. He has significant paralysis on his right side, is blind in one eye and has limited hearing in his right ear.

He does not let these disabilities hold him back, with Randolph Ryan, his teacher at St Paul’s with St Michael’s Primary, describing him as “a Trojan”.

Mr Ryan said: “Troy’s physical limitations do not affect what he wants to achieve. On the contrary, he uses them to challenge himself. During the Panathlon games he was a valued member of the team, supporting his peers and pushing himself to achieve. 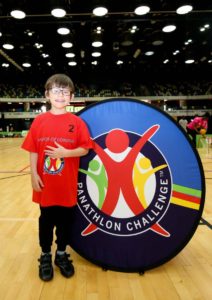 “He has shown so much courage and has made huge amounts of progress over the last year. He is a much valued, well liked and kind member of our Year 3 class.”

Troy received his award at the Copper Box Arena at the Olympic Park where his school mates were competing in Panathlon’s London Primary Finals. Troy was part of the team that won their qualifier in Hackney to reach the prestigious finals at the London 2012 venue, where they finished a highly creditable fourth.

Troy said: “Winning this award makes me feel good and very proud. My favourite sport is dodgeball and when I’m playing sport it makes me feel happy. I’m going to show my certificate to nanny and she will be so happy.”

In recent years Troy has developed epilepsy which is often brought on by extreme fatigue because he finds sleeping difficult.

Mr Ryan added: “Panathlon has supported Troy hugely. He was reluctant to take part in sports because he was often so tired. Sports, including Panathlon, have given him structure, drive and enjoyment. He is able to take part in our Daily Mile, sports we do as part of the curriculum and off-site sporting events, and as a result is much better at getting into school on time as his sleeping patterns are better overall. 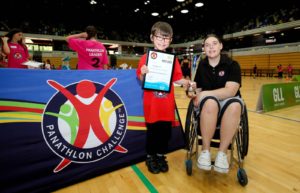 “His background may sound like a sob story, but it’s actually a positive story. It sounds tragic but he is a massive character and he’s coping so well. We are so proud to have him here, he is becoming stronger and is making great friends.”

Tyla Anderson, 24, has been Troy’s key worker at school since September. He said: “He is absolutely amazing. The right side of his body is severely impaired and sometimes he can’t come into school due to the pain he is in. But he has a genuine love for sport now, which wasn’t the case when I first met him. He is so much more confident and has improved all-round. It’s absolutely wonderful to witness his improvement.”