Panathlon has named 11 year old Umar Syed, as our 2019/20 London Primary Outstanding Achievement Award Runner-up, for the dramatic improvement in his attitude to sporting competition.

The pupil at Christchurch Primary School in Ilford, LB Redbridge, used to struggle with lack of confidence, an inability to work within a team and great difficulty with accessing sport.

Umar who has Downs Syndrome, has always been a nervous and shy boy and struggled to take part in activities and be part of a team.

With Christchurch School becoming involved in Panathlon three years ago, it provided Umar with opportunities he would not normally have had. Panathlon has allowed him to represent the school and compete. 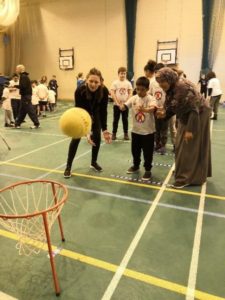 Umar is a child of few words at school, however at Panathlon events he becomes very noisy (in a good way!)

Thomas Winkworth, a teacher at Christchurch School said, “Umar encourages and supports his team mates and now gets very excited at every event. Being in Panathlon, he has tried hard to improve his accuracy in throwing events and has helped him to progress his fine motor skills in school and improve his pencil control in class.

Due to his disability, Umar struggles to take part in some of the Panathlon activities, but each year he gets more engaged and tries more than anyone at school to get better and more successful at each activity.

Thomas Winkworth went on to say, “It is hard to believe that just a few years ago this young man wasn’t able to access competitive sport. Now in front of me is a young man who enjoys achieving and competing in the Panathlon each year, someone who is confident and secure in his ability – not just to participate, but to lead a team!”

Many thanks to our sponsors of the Primary Programme in London