The experience of being a Young Leader at Panathlon competitions is of “immense all-round value” says Paul Read from Sir Herbert Leon Academy.

Students from the school in Milton Keynes have been officiating and assisting young disabled Panathlon competitors for the last five years. Read, PE teacher and Head of House, says it is a priceless development opportunity for them, especially those who themselves have special educational needs.

Paul says: “For our BTEC students studying leadership modules, Panathlon links in really well to their learning. Previously they will have only done leadership with their peers so it’s great for taking them out of their comfort zone.

“At events we as staff stand right back and let them do it themselves. It develops them holistically as a person; their communication skills and their understanding of others’ needs.”

Adapting quickly to sports that are mostly unfamiliar to them, such as new age kurling or boccia, is another skill that the students acquire.

“Learning a new sport, imparting that information to SEN children and getting an understanding of what others are capable of doing, despite their disabilities, is a big learning curve,” says Paul. 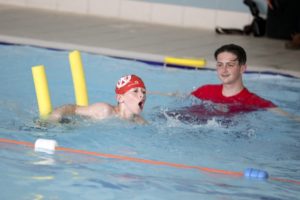 “All of our students have really grown through that process, and not just those with SEN. Our school’s catchment area is in the top 2% of deprived areas in the country. For them to come away and experience something like this changes them in a way. It makes them realise they’re not as badly off as they think they are!”

One particular success story is Year 12 sports student Callum Savill. He and fellow pupils Cody Aldridge and Alexis Coveney were highly praised for their leadership qualities at Panathlons and boccia competitions and, as a result, were invited to take their Level 1 certificate by Boccia England. They then officiated at the Lord’s Taverners National U19 Championship at the University of Hertfordshire.

Callum was selected as Boccia England’s 2018 ‘Young Official of the Year’ and also won a Jean Ratcliff Outstanding Achievement Award. “It was just his general demeanour,” says Paul. “He’s a very quick learner and applied the rules fairly and consistently.”

Another former Panathlon Young Leader from the school, Ellie Stewart-Proctor, was so inspired she has since progressed to university with the ambition of teaching special needs children.

The feedback from the students is overwhelming positive. Joshua Ash, 17, was a Young Leader at our South of England Swimming Final at the Aquatics Centre at the Olympic Park last July. He said: “It’s a fantastic opportunity to come to places like this that I wouldn’t normally experience. It helps me communicate with all different types of people including those with disabilities. To be involved in something like this is really helpful and rewarding.”