The purpose of this training was to train and support these leaders, to help them gain an understanding on the rules, paperwork, teamwork and give them coaching tips to enable them to be ready to officiate.

On Thursday 27th February Panathlon visited Birmingham for its first ever Panathlon competition. With the NIA as the venue the South Birmingham Semi-Final. 4 schools competed in the day with the top 2 teams qualifying for the final on the 1st April at Birmingham Metropolitan College. Hall Green School was the most outstanding school from the day winning 4 out of the 5 activities.

The Panathlon trained Young Leaders with Learning Difficulties from Hall Green and Victoria all did a great job! 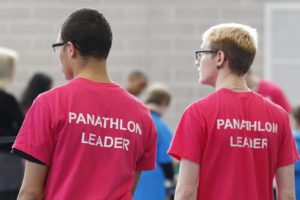 “One of the best organised events we have been to, both in competing and in leadership. Great utilization of space, our leaders got an immense amount out of it, with confidence sky high as people. All information has gone out to parents to show what the children have achieved” – Hannah Reed – Hall Green Teacher

“Friendly, relaxed and calm atmosphere, the Victoria leaders gained so much, they became organized, loved the t-shirts identifying them as special, they can’t wait to lead and try out the Primary Panathlon, massive boost for the pupils at my school” – Jo Gavin, Teacher

Phase 2 – On Thursday 6 March, Panathlon visited Birmingham Metropolitan College, Sutton Coldfields in Birmingham for the second of our semi-finals. Wilson Stuart was the outstanding school of the day winning every competition and going through to the final on the 1st April in a very strong position.

Once again the leaders with Learning Difficulties from Queensbury School and Wilson Stuart School did a superb job!

Jenny Tipping, Teacher, of Wilson Stuart said, “It’s a Great experience for my learning difficulty leaders– all of the students thoroughly enjoyed the day and tried their hardest. Our leaders all enjoyed the experience of working with others.  It’s really good for them to help build their confidence in all areas of their lives.”

Hazara an Severe Learning Difficulty leader from  Wilson Stuart- “ We had training, and due to my disability, I learnt what I could do at an event, I can write and add , so I was given training that I could do to help out on the day. I have found that leading an activity is harder than it looks as there is so much to do.  However it became easier once I could put into practice what I had learnt and helped me understand it. The competition also taught me about responsibility and making sure that I gave appropriate answers to competitor’s questions. I have enjoyed the day.” 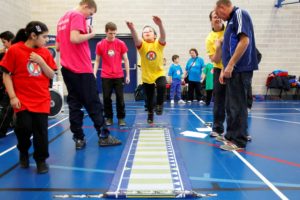 One of the Queensbury leaders trained was Moderate Learning Difficulty student, Ryan Griffiths, Ryan’s learning difficulties means he struggles to count but can organise and run an activity. Through training and buddying him up with a good speller and counter, Ryan was able to run the Field Athletics.

Ryan said “I felt good helping younger children to learn how to play different games with other children.” “I enjoyed working with fellow Queensbury student, Jay, he is good at counting, and so together we formed a team to help deliver the Field Athletics sports

Phase 3 – April 1st 2014 marked the first ever Birmingham Panathlon Final. Special guests Louise Sugden who co-captained the GB women’s Wheelchair Basketball team at London 2012 and her Paralympic team mate Jude Hamer were on hand to motivate and present the medals to the four teams who had qualified via hard fought semi-finals.

It was Jude’s first experience of Panathlon. “I didn’t really know what to expect but it was fantastic to be a part of and I enjoyed my first Panathlon.”

The Final featured Moderate Learning Difficulty sports leaders from Queensbury Special School, Victoria Special School and Hall Green. They had been involved in previous rounds.  All the Leaders received great feedback and comments on how they had explained the games, been so patient and encouraged the competitors to do their best.

“Our students and Leaders again have had a fantastic day and this is the first time some of them have been out to a competition. We’re really looking forward to seeing you for the Birmingham final in July!” Jo Gavin, Teacher. 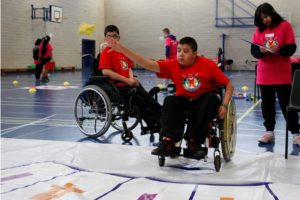