In addition to the hundreds of Young Leaders trained around the country in 2014, Panathlon has developed a Leadership programme for Young people with Moderate and Severe Learning impairments.

St Philips School in Chessington was invited by Panathlon to become involved as part of the Officials Team for the West London Panathlon Challenge competition. Such was the success, this then developed in involving them in a further competition in Surrey. However, the process starts off with a training day for the Young Officials which is a practical course in each of the Panathlon Sports.

Andy Hill, Teacher from St Philips said, “The group really enjoyed the training day and I was very pleased with them as it would have been difficult for many. They are really looking forward to the competition now.” The St Philips group have since been working towards The Sports Leader Award Level 1 qualification. They are now in their last year at school, aged 15 and 16 years. They have been at St Philips School since Primary School, having previously been in a mainstream primary school. 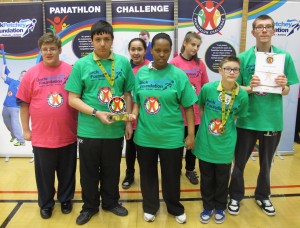 So far, in their course they haven’t been involved in any competitions. They have only worked with a local primary school and delivered 20 minutes of paired leadership. Being involved in a day’s competition with Panathlon is a significant step up for them and will count as practical experience in their Leaders qualification.

West London Competition – The competition was held at Chessington Community College involving 4 Borough Teams from Kingston, Sutton, Merton & Wandsworth. The St Philips leaders did very well. Chessington College Leaders worked well with them, and involved them in the decision making and leading the sports.

Andy Hill said, “We were delighted to be asked to take part in helping with the Panathlon. Before this day I have been involved in preparation training with the leaders as they were very anxious. Today they have grown in confidence, they have learnt a lot and have all been saying, how much of an amazing experience this has been for them. This has been such a unique experience. Thank you!”

Panathlon wishes to thank the Downlands Educational Trust for their support on this project.

The Panathlon Foundation met and trained a group of 7 leaders with learning disabilities. The Foundation covered 3 of the Panathlon Sports over a 3 hour period & then Panathlon supported 2 local sports coaches to continue the work delivered in the Training over the next 3 weeks in the 3 Panathlon sports.

These leaders with severe learning difficulties, who have been involved in the Panathlon Team in the last few years as competitors, now, as older members of their school, used the training to become the coaches for the next generation of the schools Panathlon competitors and to officiate.

The purpose of this training was to train and support these leaders, to help them gain an understanding on the rules, paperwork, teamwork and give them coaching tips to enable their team to be ready come the 2014 Panathlon Kent competition.

As part of the training, the leaders finished with a rules quiz based game, asking them to score a boccia game, which they found easier as the game continued.

Teacher, Lorraine Stapleton believes that they will get a lot from this program, particularly in the coming weeks as the learning is re-enforced. 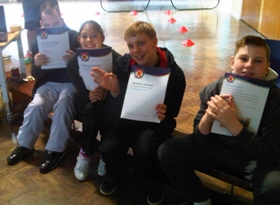 Leaders with their Panathlon Certificates (left)

Phase 2 – Following Training where Panathlon visited Ridgeview School to train 7 of their pupils with learning disabilities in the Panathlon Sports, these young leaders then became involved in the Panathlon Training sessions for the younger pupils at their school.

Lorraine Stapleton, Teacher at Ridgeview School told us about what the group had been doing and their expanding role in the school,

“The Sports Leaders at Ridgeview School now assist with a Panathlon Athletics Club and two Change4Life Clubs. They take the lead organising the weekly sessions and have learnt additional coaching skills such as motivating pupils to maximise participation. They have fully embraced their new responsibilities with pride.

In addition, some of the leaders now assist the PE Teacher on a Wednesday afternoon, delivering Panathlon sports to the younger children. The raised profile of these leaders has resulted in further pupil requests to do a similar course next academic year. We have purchased specialist T-Shirts for them to wear to re-enforce their role within the school. Overall the confidence, capability and behaviour of the Sports Leaders has risen significantly and we are very lucky, as a school, to now have this additional resource.”

The Ridgeway Leaders also then came to the first round of Panathlon in Kent and worked with mainstream leaders in helping to officiate.

The Tonbridge & West Kent Team, (see picture at the very top – the team in Green!) which the leaders helped prepare, came 4th overall at the North Kent Panathlon round with 36 points, including Gold in the Field Athletics, Bronze Medals in the Polybat, Kurling & Track Athletics.

Panathlon wishes to thanks The Downlands Educational Trust in their support of this project.